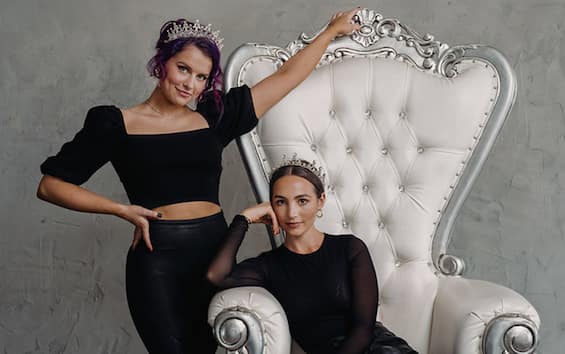 The creators of The Unofficial Bridgerton Musical, the unofficial musical inspired by the Netflix television series, have been sued by the streaming platform on charges of copyright infringement.
The team behind the production of this show has been sued in a United States district court, more precisely in Washington, as reported by the journalist Carson Burton in the US magazine. Variety. Not surprisingly Washington: in this city last July 26 the aforementioned musical was staged for the first time, which until then was only a catchphrase of social networks.

Abigail Barlow and Emily Bear are the authors of the project, who initially developed the musical on social media but who are now making a splash outside the social circle, climbing the music charts and enjoying huge live success.
The aforementioned pair of young singers, musicians and dancers managed to rank # 1 on the US pop charts on iTunes, and won a Grammy in 2022 in the category of Best Theatrical Musical Albums.
Netflix claims it made “repeated objections” against the team as they planned to stage a live show of the project.

“The Unofficial Bridgerton Musical Album Live in Concert” is the live show that took place at the Kennedy Center in Washington early last week, on July 26, 2022, and was sold out (with the ticket price rising to $ 149 ).

Reportedly (and reported by Variety), the play featured more than a dozen songs that included dialogue, character traits, expressions and other elements exactly copied from “Bridgerton”.

The streaming giant claims that “The Unofficial Bridgerton Musical Album Live in Concert” has made the public understand that it has used the brand Bridgerton “with permission”, something that the producers of the musical would never have achieved, on the contrary: Netflix says it has clearly expressed its position to Abigail Barlow and Emily Bear.

Netflix also opposes a supposedly planned merchandising line as well as upcoming (and upcoming) production tour dates. For now, representatives from Barlow and Bear have not commented on the lawsuit, he explains Variety.

“Netflix supports fan-generated content, but Barlow and Bear have come a long way, trying to create multiple revenue streams for themselves without formal permission to use Bridgerton intellectual property,” Netflix wrote in an official statement. “We made an effort to work with Barlow and Bear and they refused to cooperate. The creators, cast, writers and crew have poured their hearts and souls into ‘Bridgerton’ and we are taking action to protect their rights. “

The words of Shonda Rhimes

Shonda Rhimes, the creator of the “Bridgerton” series, expresses the same despair as well as the same j’accuse of Netflix. “There is so much joy to see audiences fall in love with ‘Bridgerton’ and watch the creative ways they express their fandom,” said Shonda Rhimes. “What started out as a fun celebration by Barlow and Bear on social media has morphed into a blatant stealing of intellectual property solely for the financial benefit of Barlow and Bear,” continues Rhimes. “This property was created by Julia Quinn and brought to life on screen through the hard work of countless people. Just as Barlow & Bear would not allow others to steal their intellectual property for profit, Netflix cannot stand by and allow Barlow and Bear to do the same with Bridgerton, ”concludes Shonda Rhimes.

Below you can find out who are Abigail Barlow and Emily Bear, the two singers, musicians and dancers who created “The Unofficial Bridgerton Musical”.