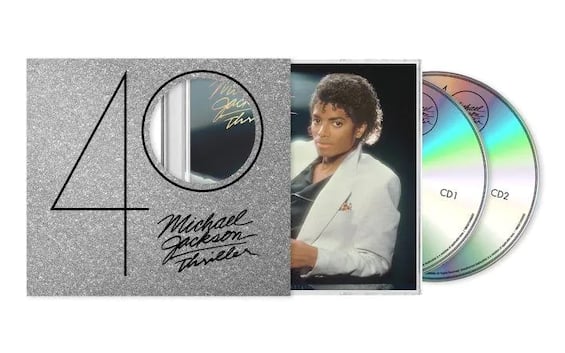 Thrillerthe iconic album by Michael Jackson which has exceeded 100 million copies sold worldwide, turns 40 this year and, to celebrate it, Sony Music and the Estate of Michael Jackson publishes, today Friday 18 November, aexclusive reissue. Michael Jackson Thriller 40 will contain a double disc consisting of Thriller and a second album with some surprises for the fans, including songs by the King of Pop written during the making of Thriller and never published. Thriller will also be available in the version LP UltraDisc One-Step 180g 33RPM made by Mobile Fidelity. Mastered from the original analog master tapes, pressed by RTI, and strictly limited to 40,000 numbered copies, Hybrid SACD by Thriller presents the album in a realistic way (an UltraDisc One-Step 180g 45RPM 2LP set of Thrillers 40 will be published soon). Several activities are planned between now and the end of the year to honor this work Michael Jackson which broke a record 8 Grammy wins, shattered musical barriers and forever changed the frontiers of pop music and video. The album Thriller it spent 500 weeks on the Billboard charts and has sold over 100 million copies worldwide since its release on November 30, 1982. The first of these initiatives is the launch of new products with the special Thriller 40 logo, now available exclusively through the MichaelJackson.com webstore. Thriller holds a record to date of 37 weeks at No. 1 on Billboard. It was the first album in history to spend each of its first 80 weeks in the Top 10 of the albums chart, a feat achieved by only one other album in the nearly four decades since. During its 112th week on the Billboard album chart, it became the first title ever to be certified RIAA 20X multi-Platinum (October 30, 1984) and became the first title ever to be certified more than RIAA 30X multi-Platinum in 2015 and has since been certified at 34x Multi-Platinum. Thriller arrived at number 1 in all countries of the world, including UK, France, Italy, Australia, Denmark, Belgium, South Africa, Spain, Ireland, New Zealand, Canada and Apartheid South Africa and remains the best-selling album of all time with sales exceeding 100 million. Seven songs from the album became Top 10 singles and three, Beat It, Billie Jean And Thrillerentered at number 1. The music of Thriller it was so unique for the time that it defied any previous definition of rock, pop or soul. Beat It it was a new kind of pop-rock hybrid and demolished the long-standing segregation between white and black music along with Eddie Van Halen’s incendiary guitar playing. In The Girl Is Mine, two men, one white and one black, are joking about the same girl. In the same album there were songs like Wanna Be Startin’ Somethin’ of African descent e Billie Jean based on rhythm and blues.

Michael set out to revolutionize the way storytelling and entertaining at scale through video, but faced obstacles. Despite the cinematic setting, dramatic narrative and spectacular choreography of Billie JeanMTV at the time, which was programming almost exclusively white rock artists, refused to play it. Once the wall came down, MTV’s ratings soared and a door opened for a generation of African-American artists. “He was MTV’s Jackie Robinson,” said cultural critic Touré. Then came the unforgettable short film Beat Itwhich he saw Michael bring two bands together through the power of music and dance. And then there was Thriller. Previewed at the AVCO Theater in Los Angeles in 1983, sold out every night for three weeks. No other video before or since has generated such excitement and hold such a hold on our attention that 40 years later we all share it as a collective memory and it remains the only music video to be inducted into the elite National Film Registry by the Library of the Congress. The music of Thriller and of Michael’s other successful albums is featured in the hit show by vegas Michael Jackson ONEto the Michael Jackson ONE Theater at Mandalay Bay Resorts and Casino and in the acclaimed musical by Broadway MJ The Musical at the Neil Simon Theater in New York. Jackson has sold over 1 billion records and remains one of the best artists in the world in terms of views.