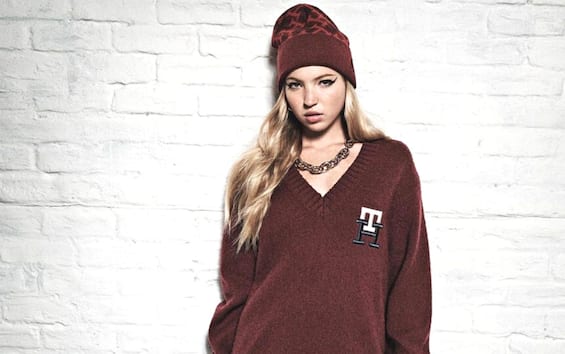 Spotlight on New York Fashion Week, where the most important brands in the world are sharing their look ideas for next spring / summer. Among these also Tommy Hilfigerwho for her catwalk she chose as a model, among others, too Kate Moss’s daughter, Lila.

Lila Moss, 19, walked the runway for the famous American brand, sporting a striped dress / polo on the runway of Brooklyn’s Skyline Drive-In theater. Interesting accessories: black leather gloves, black boots and transparent tights with TH monogram, ready to become one of next season’s must-haves. Lila Moss wasn’t the only big name to hit the catwalk: Tommy Hilfiger also hired supermodels of the caliber of Winnie Harlow, Ashley Graham and Julia Fox. In the audience, inevitable mom Kate Moss, who paraded for the brand in 1996 during London Fashion Week. The famous supermodel was sitting in the front row next to Shawn Mendes, Travis Barker and Kourtney Kardashian. All with umbrellas, cause rain. A unique show, given that the brand presented the line simultaneously with a virtual event in the metaverse. On the catwalk, Tommy Hilfiger presented the Factory spring / summer 2023 collection, dominated by the collegial style, typical of the brand and a true trend of this period. Maxi colored stripes and kilts were associated with fetish elements such as boots, leather gloves and whips. The show ended with a ‘surprise performance: model Alton Mason, after his last walk, stopped by Travis Barker and took him to the stage. The drummer thus offered the audience a live set while the models continued to parade on the catwalk.

Lila Moss, in the footsteps of mom Kate

For Lila Moss, Tommy Hilfiger’s is certainly not the first catwalk. The 19-year-old has long since begun to follow in the footsteps of her famous mother, who enlisted her in her modeling agency. Lila Moss at New York Fashion Week he also opened the Fendi fashion show. The girl was born in 2002 from the love between Kate Moss and Dazed & Confused editor Jefferson Hack. Lila Moss won her first big campaign at just 16, becoming the face of Marc Jacobs Beauty.