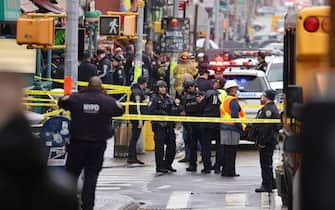 At least 13 people were injured by gunshots at Sunset Park station, in the Brooklyn neighborhood, New York. Witnesses say they saw a man open fire on passengers who were boarding the train

Law enforcement officials reportedly are looking for a man 1.60-1.65 tall, who was wearing a gas mask at the time of the shooting and was dressed like a subway employee.

Eric Adams, Mayor of New York, asked residents to “keep clear of the area for their own safety and to facilitate investigations.”

Some helicopters were also deployed to patrol the Sunset Park area

The use of smoke bombs is hypothesized to cause confusion. The New York police have instead denied that explosive devices are involved, as had instead been previously reported

All public schools in Brooklyn near the scene of the subway shooting are in ‘shelter-in’: students are required to stay inside the buildings. The local media reported it

In addition to the New York Police Department, FBI men also came to Sunset Park. The alarm is also being raised in other American cities, where security has been strengthened