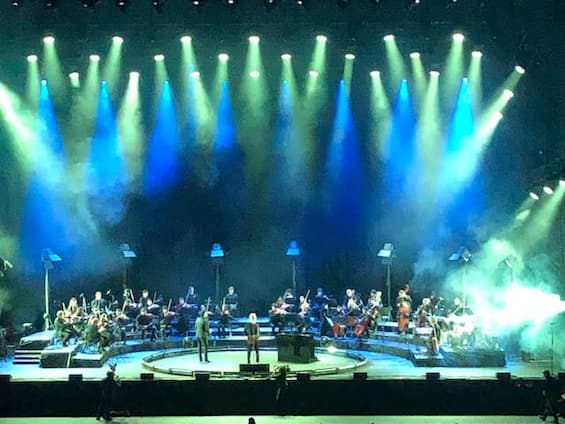 As in a tribal rite, the stage has a luminous circle that welcomes its dispenser of stories. And against all musical logic Niccolò Fabi starts with a verbal incipit, evocative like a coming-of-age novel: “The first thing that comes to me is that the power of applause before something musical happens is the strongest of the evening because it is not connected to what will happen but to what happened before, indeed I could leave, I brought you here under deception, there is no concert. Indeed I do worse I bring a table as in a performance by Marina Abramovich and we all hug but there is no concert. Mine is a sinusoidal path from the first album, 25 years ago, and if there is something to celebrate it is not a career but the idea that discomforts can be narrated and you can make them become a treasure. What we consider success is a variegated and nuanced concept. Your presence here is the sign that you can find a path in life that does not have to go through high-sounding standards. I will sin rhetoric, and I apologize, but if I don’t do it at the Verona Arena… where do I do it? Less VAT and more rhetoric, I declare. In 2000 I did Clear in the West, perhaps the most unfortunate record and so I want to start there. The song tells of a doubt, a state of mind that then became a small state that symbolizes the community gathered here “. Niccolò Fabi thus makes his party take off at the Verona Arena, on a mild evening under a blanket of stars. AND’ My status to ignite the feelings. An epochal album, not only for the architect who built it but for the history of Italian music of the third millennium The Care of Time of 2003 that Niccolò introduces with And it is not, a pearl of poetry that leads us to the profound meaning (of life). A feature of the evening are the sudden changes in time, it is a sinusoidal concert, to use a term that Niccolò likes: protected by red lights there is Let’s pretend… that whoever makes success deserves it. It would have been nice to listen to her on a blue sofa and never break up again. To confirm that there are millions of ways to take sides here is a verse of I Am the Other: I am the veil that covers the face of women lights up the applause and Niccolò also stops, stretches a hiatus between himself and the music and then remembers that to express a thought it is not necessary to run aground on Bella Ciao, discuss whether it is political or social . We are currently karaoke, Fabi dixit, which opens with Summer Wind. Between hints of showmanship with Don’t Stand so Close to Me by The Police and in the Blu Dipinto di Blu by Domenico Modugno Here you are preceded by an unpublished request for him and asks that cell phones be the milky way of this evening. She sits on the floor for The winner is the one who drops and what happens is that the throat tightens it to the public. The applause is like a long wave and he confesses that it is the most meaningful song he has ever written. He goes back to the guitar for Sixteen ways of saying Green, preceded by a reasoning on traveling which is to get away from security and take the public on their travels in Africa. On those dusty roads this song was born that tells us what a night really means, what it means to be the mother of the dark. The travel theme persists, just turn your gaze towards Orient, where there is the cold that makes us embrace and the heat that makes us undress. With The Antiques Shop the delicate part of the evening ends, the one that takes us to a special place at the end of the rainbow. And a thousand thanks to each of you!

The change of set is throbbing, almost as if it were a moment in which the Chinese shadows dictate the rhythm. The stage fills up withClandestine Night Orchestra (directed by Enrico Melozzi) which is presented in Arabic with Go beyond. With Niccolò Fabi on stage too Roberto Angelinialways his music partner, and the drummer Filippo Cornaglia. Always open to new experiments but bringing his story with him, Niccolò also involved Yakamoto Kotzuga who took care of the electronic components of some of the pieces that he will present with the Orchestra. There are moments in a person’s life when the planets align and no words are needed to emphasize that we want, we demand a world without war. Apart from me but also from everything. Pinched the attack of I lost the city, the narration of a human defeat in the face of urban planning and shady deals in buildings because what saddens most is that we have lost the time to talk to each other; Niccolò spins on himself like a tarantolato, twists on the lost city, an invisible Calvinian city. One man only it is in the shape of a person and hides behind a prayer. Falling asleep in winter is the culmination of Agricultural philosophya piece arranged with an important string work, accompanies us to A hand on the eyes, greeted by applause from the very first notes: Fabi performs it on the piano because since we are approaching the finale it is right to clench your fists so as not to move from here and treat yourself to a long instrumental coda. Although the time left is short there is still time for To build, heard by the people of the Arena in a murmur since Good Friday, there is time to progress day after day and we must insist even if the snow will fall shortly. The rhythm of the hands accompanies the stage A good idea which then is a comet to follow until you reach the planet where, at least once, everyone can be the father of a good idea. Which in the Arena translates into an all standing clapping. I can say that Leave one day in Rome it is less sad than breaking up tonight in the Arena, in the wake of a vibrant rock. Retracing the texts of Niccolò Fabi one has the feeling of being in a factory of wisdom, certainly not that of Guglielmo da Baskerville or The Name of The rose, but certainly in that of Italic music. Before the greetings, the surprise, an unpublished renamed Di Aratro di Arena. And the party is perfect!