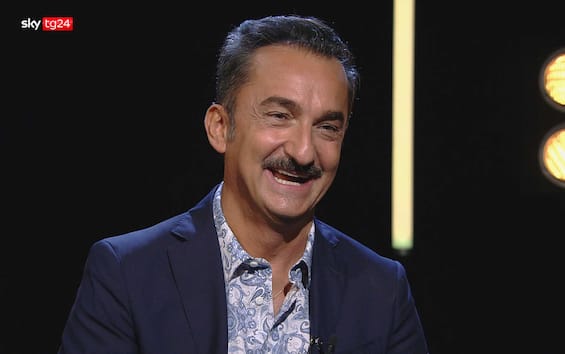 IS Nicola Savino the protagonist of the new episode of “Stories”the series of interviews with the main interpreters of the show by Sky TG24. Guest of the Deputy Director of the newspaper Omar Schillacidirected by Francesco Venutothe tv and radio host talks about himself in “100% Nicola Savino”on air Saturday 17 September at 9pm on Sky TG24 (in rerun on Sunday 18 September at 3 pm), and always available On Demand. A journey made up of anecdotes and points of reference: the life of a DJ, imitations, boyish memories, nightmares and dreams of one of the most beloved TV presenters.

Nicola Savino leads from Monday to Friday at 20.30, “100% Italy”, The new exciting TV8 game show, in which two pairs of competitors compete to test themselves and guess the tastes of Italians, represented in the studio by a panel of 100 people. “It’s a poll game, the great poll game – Savino reiterated -. We have 100 Italians in the studio who represent a credible statistical sample. Those 100 “are you”, are Italy. An “it is you” who is adventurous from a linguistic point of view but is right from a mathematical point of view because we have selected them by gender, level of education, geographical origin and age, so there are various statistical criteria that we have respected “. One of the things that surprised him most of the Italians in these first episodes is “Surely cell phone addiction, now in the polls, is the last thing they look at before going to sleep and the first thing when they wake up”.

The chat develops in 40 minutes that retrace some of the fundamental stages in the life and career of Savino who finds himself for a role play answering questions as if he were a competitor of his show. Mathematics or Italian? “Italian even if I liked math a lot“. Between Gerry Scotti, Amadeus, Mike Bongiorno or Nino Frassica in this “mission” as the host of the game show he would prefer to be inspired by “A good mix of these four television giants would be a good thing”. As a reference model it has the “Mike Bongiorno of” Flash “and” Superflash “for which I was crazy. I also remember the initials of Toto Cutugno at the end ”. “There is another program that I liked a lot – he continued – who moved his head a bit and brought me closer to 100% Italia and it is a program that Emilio Fede was doing on Rai and was called “Test”: there was a time when in the 80s tests were especially fashionable in the newspapers and tried to bring this thing on television and it was a great success ”. So, a few steps back. The student Savino: “In scientific high school I went in alternating phases because in the first and second I was promoted in June, in the third I failed. But what I always repeat to myself is that in the third I started doing radio so it was worth it, because I was rejected because of the job I still do now.“. The first kiss: “He arrived very late, at the end of the third high school “. The first time as a DJ: “We had a house that we rented, this house was vacant in the spring of that year of the third high school, I took advantage of this thing to put two turntables a bit shabby, I bought a mixer and started doing the first tests, all absolutely self-taught “. While between techno music and Italian songwriting: “Now, after having eaten on the plate of techno-dance music because there is a wretched techno version of Pinocchio that I am responsible for – he says ironically -, now clearly I lean towards the songwriter, songwriter who was hated with full knowledge of the facts. If you told me Guccini, De André, De Gregori and even a little Venditti, even if less Venditti, they were the ones I really hated. Well, they are the ones I love the most now ”. And then the dreams: “I am very clear what I would like to do, they are dreams that I have inside of me ”. And the hypnosis sessions: “I have been there two or three times and one of these times was recent. In times of stress I suffer from something that wikipedia or the internet describes as “pavor nocturnus” that is, at night I cry out loud because I see menacing figures “. A passage on the imitated characters and on the caricature to which he is most linked is inevitable: “That of Giampiero Galeazzi who is no longer there and which is also a somewhat romantic memory. I have to thank the son I heard after his departure, an extremely respectable person, the whole family, as was Giampiero. Here, I must apologize to the memory of Galeazzi because I was doing a terrible imitation of him but Giampiero was a polite person, much more polite than I did but he was there, he fit perfectly, the caricature was like that.“. And then the show character who left him something special: “Peter Gabriel came on the radio and he is already a giant of music but I remember that he told us something that particularly struck me. He comes to Italy every year, he goes to the Sardinian hinterland, but he said that that year had been wonderful because they had gone with his dad to the river, had bathed and hugged each other. I found an image so powerful, so beautiful, that it stuck with me. Because those are the things that need to be done before our parents leave. I don’t say I did the same thing but I remember having long hugs with my father before he left“.