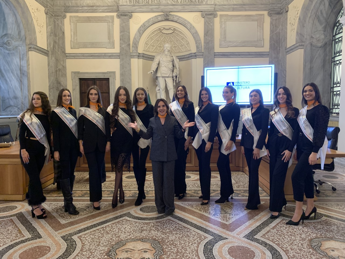 The patron: “But no one will stop our competition, we have always been ahead of the times”

No return in Rai for “Miss Italy”. The owner announced it to AdnKronos Patricia Miriglianibefore participating in the initiative “The culture that defeats violence” with the minister Gennaro Sangiuliano in the Spadolini hall of the Mic at the Roman College.


“We had plans to make the final of Miss Italy in a TV container for families under the Christmas holidays, on Rai even if not on Rai 1 – reports Mirigliani – it would have been a good opportunity for both Miss Italia and Rai, among other things at no cost, therefore without using the money from the license fee”. The hypothesis, according to what we learn, was placed within the program “Your Business” on Rai2.

“This possibility on Rai was ultimately denied, apparently because the values ​​of the competition are no longer in line with today’s values… But only Italy has this preconception, which is a sign of ignorance”, he accuses Mirigliani.

And yet, Mirigliani observes again, “many of our girls are now engaged in the world of TV and Rai in particular, as well as in cinema, theatre, fashion and even journalism and politics. I can think of, for example, the names of Mara Carfagna and of Monica Maggioni…”. Where will it be broadcast, therefore, “Miss Italy” 2022 edition? “We are evaluating other opportunities”, Patrizia Mirigliani limits herself to replying.

“Culture is above all beauty and if it is true that ‘beauty will save the world’, combinations like today’s can only be the prelude to a more beautiful country, richer in identity and values”, he then underlined Patricia Miriglianipatron of ‘Miss Italia’, speaking in the Spadolini room of the Mic at the Roman College at the event ‘The culture that defeats violence’ on the day dedicated to the fight against feminicide and thanking the Minister of CultureGennaro Sangiuliano, “for having wanted to welcome us into his ‘home’, demonstrating great sensitivity and attention towards a female theme that cannot and must not concern only women”.

Mirigliani assures that “no one will stop Miss Italia” and recalls that “Miss Italia is the beauty contest that in 83 years has told the story of the country; it is an emblematic rite of national femininity, a social phenomenon, an event for families and the dream of many young women. ‘Miss Italy’ has always belonged to the culture of the country and is an appointment that is part of the collective imagination and national identity, since it manages to tell in a simple and direct way the story of ordinary girls who for a few days rise to the fore and then set off, strong this experience, meeting their career and their life”.

Patricia Mirigliani underlines that “the competition has always known how to interpret and sometimes anticipate changes, transforming and renewing itself. Unfortunately, the perception of beauty in our country today has changed, beauty is under attack.

But, she continues, “I continue to fight my battle against the hypocrisy and the preconceptions of those who are unable to formulate a thought that is free from pathetic clichés, as serious as the physical and psychological violence that is increasingly frequent against women “.

And she hopes that “this new government and the Minister of Culture can give ‘Miss Italy’ and my girls back the dignity they deserve”, addressing “a thought of esteem to President Meloni, a symbol of women who achieve their goals for their great abilities with great sacrifices”.