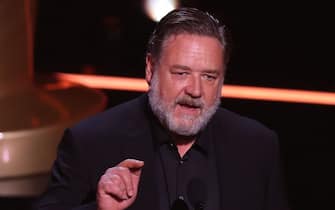 The famous Gladiator Russell Crowe he’s not new to such roles. In the film Noah we see him in the role of the biblical character Noah, the protagonist of the film

WATCH THE VIDEO: Russell Crowe, 6 things you may not know about the actor

Jennifer Connelly lends his face to Nameeh, wife of Noah. On May 25, Connelly will be in theaters with Top Gun: Mavericksequel to the 1986 cult

WATCH THE VIDEO: Yesterday and Today: Jennifer Connelly, how she changed

The London actor Ray Winstone plays Tubal-Cain, descendant of Cain and son of Lameth and Zilla

Methuselah is represented by one of the most important actors in the history of cinema, Anthony HopkinsAcademy Award for Best Actor Ne The silence of the lambs, for his portrayal of Hannibal Lecter, and in the 2021 film The Father – Nothing is as it seems

The best films by Anthony Hopkins, Oscar winner with The Father

Launched into the world of cinema thanks to the role of Hermione, best friend of Harry Potter, Emma Watson plays Ila

30 years next July 9th, Douglas Booth in Noah has the role of Shem.

Logan Lerman, famous for playing Percy Jackson in two films, the actor is Cam. Next July we will see him alongside Brad Pitt in Bullet Train

Leo Mchugh Carroll, 13 years old at the release of the film, today she is 21 and owes her fame to Noah, where she plays Jafet (in the photo, left)

The New Zealander Marton Csokas he is remembered by all for having lent his face to Celeborn The Lord of the Rings. In Noah is Lamech

Also famous as a voice actress who lent her voice to Pennina The gang of the woods, Madison Davenport plays in Noah the role of Na’el

Finn Wittrock plays the young Tubal-Cain. We also recently saw him at the cinema with Deep waters

Barry Sloaneactor known for his appearances in many TV series, such as Gotham or Shamelessin Noah is a poacher