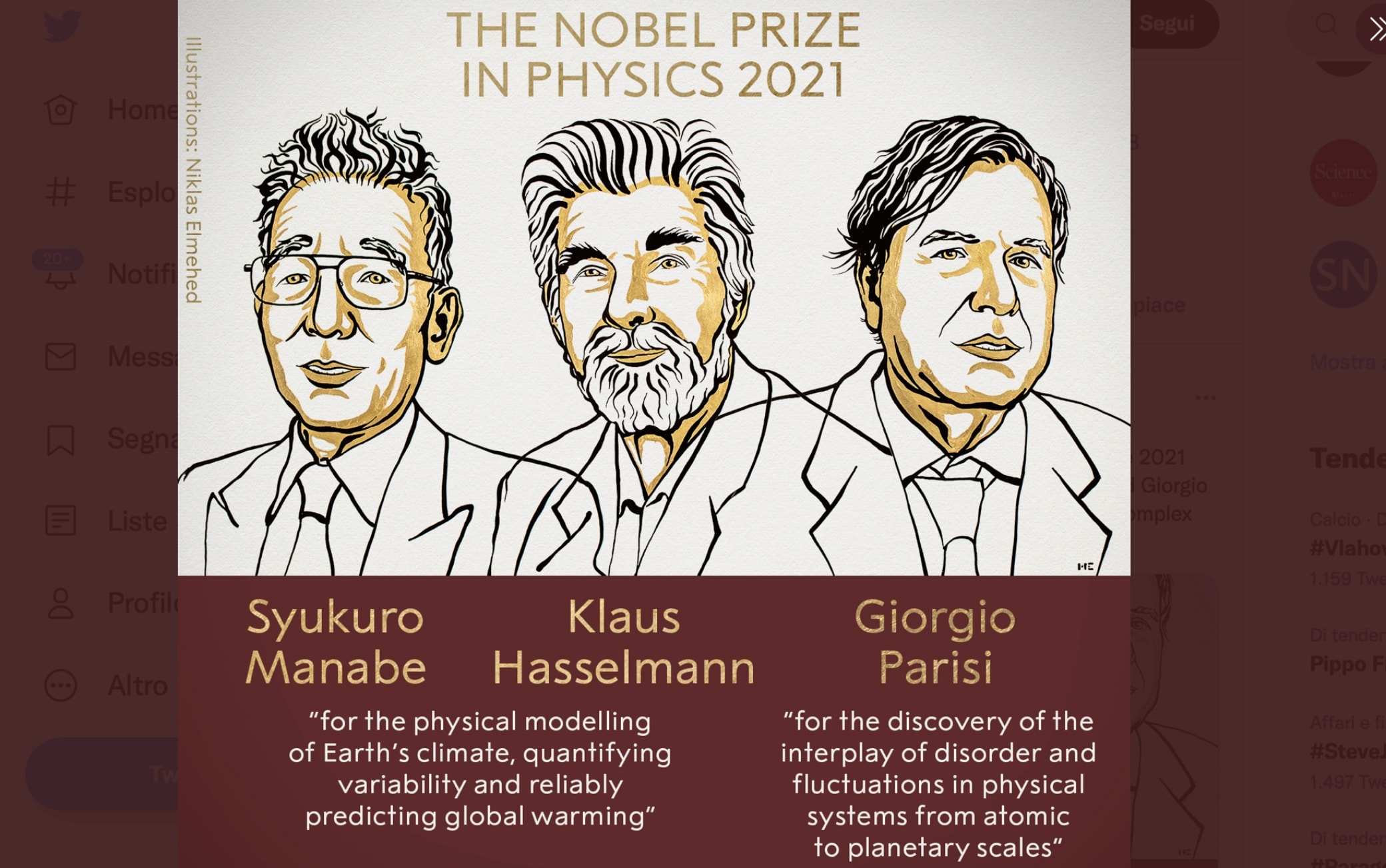 Giorgio Parisi, Syukuro Manabe and Klaus Hasselmann won the Nobel Prize in Physics, after yesterday’s victory of David Julius and Ardem Patapoutian of the Nobel Prize for Medicine. Parisi, theoretical physicist at the Sapienza University of Rome and the National Institute of Nuclear Physics (Infn) and vice president of the Accademia dei Lincei, was awarded for his research on complex systems (WHO IS PARISI). “I’m happy, I didn’t expect it, but I knew there could be possibilities,” Parisi said in liaison with the Stockholm Academy of Sciences. The last Nobel Prize to a researcher born in Italy is that of 2007 to Mario Capecchi, active in the USA, but to go back to an Italian researcher who carried out most of the work in Italy we must go back to 62 years ago, to the Nobel Prize for Chemistry awarded in 1959 to Giulio Natta (WHO ARE ALL THE ITALIAN WINNERS OF THE NOBEL). The other two 2021 winners, Manabe and Hasselmann, received recognition for their research on climate models and global warming. Last year the award went to Roger Penrose, Andrea Ghez and Reinhard Genzel.

The President of the Republic Sergio Mattarella expressed great satisfaction for the awarding of the Nobel Prize in Physics to Prof. Giorgio Parisi and extended his congratulations to him for this very high recognition that honors Italy and its scientific community. Shortly after, the congratulations also arrived from the Prime Minister, Mario Draghi, who expresses the warmest and most heartfelt congratulations to Professor Parisi on the victory of the Nobel Prize in Physics, on behalf of the Government and his staff. Professor Parisi is a pioneer of research in theoretical physics and has linked his name to decisive discoveries in the field of quantum chromodynamics and the study of complex disordered systems, from the atomic to the planetary scale. The premier will receive Professor Parisi at Palazzo Chigi to congratulate him on the extraordinary success.

Giorgio Parisi, 73-year-old theoretical physicist, won the Nobel Prize “for the discovery of the interaction between disorder and fluctuations in physical systems from the atomic scale to the planetary scale”. His was a successful scientific career, dedicated to frontier topics: from the Higgs boson to the behavior of complex systems, such as neural networks, the immune system or the movement of groups of animals, with the mechanisms underlying perfect bird formations in flight and whose rules could also explain complex human behaviors, such as electoral trends or stock market turmoil. His work took place mostly in Italy, as a professor of Theoretical Physics at the Sapienza University of Rome, as an associate researcher of the National Institute of Nuclear Physics (Infn) and he was president of the Accademia dei Lincei from 2018 to 2021. Numerous contributions have been decisive and widely recognized by the international scientific community who have made in the fields of particle physics and statistical mechanics, fluid dynamics and condensed matter, up to supercomputers.

Born in Rome on August 4, 1948, Parisi graduated in physics at Sapienza in 1970 under the guidance of another great Italian physicist, Nicola Cabibbo, with a thesis on the Higgs boson. He began his scientific career at the Frascati National Laboratories of the Infn, from 1971 to 1973 as a member of the National Research Council (CNR) and from 1973 to 1981 researcher at the Infn. In those years he also worked a lot abroad, first in the United States, at Columbia University in New York (1973-1974), then in France, at the Institut des Hautes Études Scientifiques in Bures-sur-Yvettes (1976-1977) and at the Ecole Normale Supérieure in Paris (1977-1978). On his return to Italy he worked for the Infn and in 1981 he held the chair of Physics theory at the University of Rome Tor Vergata and 12 years later, in 1992, he moved to the Sapienza University, where he held various teachings, including which theoretical physics, quantum theories, statistical physics, probability. With Nicola Cabibbo and other Italian physicists he participated in the APE100 supercomputer project. In 2018 he was elected president of the Accademia Nazionale dei Lincei, of which he had been a member since 1988. Numerous awards for his work internationally, such as the Boltzmann Medal (1992), the Dirac Medal for theoretical physics (1999, the Medal Max Planck (2011), the Wolf Prize (2021). It was dated September 2021 The quote in the Clarivate Citation Laureate.

Who are the other two winners

Half of the Nobel Prize was awarded in shares of a quarter each to Japanese meteorologist and climatologist Syukuro Manabe, 90, and German oceanographer and climate modeler Klaus Hasselmann, 89, for “the physical modeling of the Earth’s climate, which quantifies variability and reliably predict global warming. ”

Parisi was among the favorites

A few days before the announcement, the usual list developed by the Clarivate Analytics experts was released, which select the candidates considered among the favorites, using the citations received from their works among the scientific publications as a yardstick. As Wired explains, “the ranking is the result of the analysis conducted by the Institute for Scientific Information (Isi), which every year evaluates the impact of the researchers who have most influenced the international scientific community”. As for Physics, for 2021 the Italian Giorgio Parisi, emeritus professor at Sapienza in Rome, was cited as the Nobel candidate “for his revolutionary discoveries in the field of quantum chromodynamics and the study of complex disordered systems “.

“It is a historic day for Italy and for this I want to say a big thank you to Giorgio Parisi. I think I can do it on behalf of many”. This is the comment of the Minister of University and Research, Maria Cristina Messa. “Saying ‘congratulations’ to our new winner of the Nobel Prize in Physics is even an understatement: Giorgio, with his life dedicated to science and research, with the passion that has never abandoned him, has been over the years, and continues to to be today, teacher and example for many young people, researchers and non-researchers.