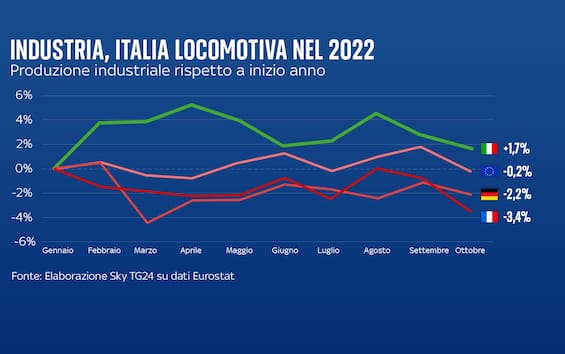 Despite fears of a possible recession in the year that has just begun, Italy remains the leader in the growth of industrial production in Europe in 2022. Lucio Poma, Nomisma’s chief economist, talks about Italian industrial solidity on Sky TG24 Business hosted by Mariangela Pira

The latest forecasts released by the main international economic bodies do not bode well for Italy. In the World Economic Outlook released last October, the International Monetary Fund forecasts a contraction of -0.2%, with unemployment rising to around 9.4%. This should not make us forget the strong rally that the Peninsula had between 2021 and 2022, underlines Lucio Poma: “Our Controvento observatory, which focuses on manufacturing capital companies, has found that there is a manufacturing engine that drives the growth, among which Emilia Romagna stands out in first place. Let’s not forget that the widespread figure is always an average figure, and this indicates that there are groups of companies that grow in an extraordinary way, with margins of over 25%”.

Watch below the episode of Sky TG24 Business of 4 January 2023 with guests: Lucio Poma (chief economist of Nomisma) e Claudius Bardazzi (Head of the Findomestic Observatory)