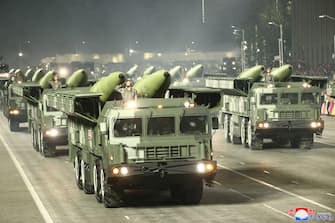 North Korea will “strengthen and develop” its nuclear weapons faster: leader Kim Jong Un assured him during the high-profile military parade held last night in Pyongyang to celebrate the 90th anniversary of the founding of the People’s Revolutionary Army Korean (Kpra)

How many nuclear weapons does Russia possess: the report

“We will continue to take steps to strengthen and develop our nation’s nuclear capabilities at a faster pace,” said Kim, in the official KCNA report.

Nuclear weapons are “a symbol of national power” and North Korea “will strengthen and develop them further at the maximum speed possible”, taking into account that “they cannot be tied to a single mission”, Kim added.

“If any force tries to usurp the fundamental interests of our country, our nuclear force will have no choice but to carry out its second mission of a preventive nature”, assured the leader in menacing tones, referring to an attack against concrete threats.

The KCNA also reported that the most sophisticated weaponry was displayed during the parade, including the mighty Hwasong-17, the intercontinental ballistic missile (ICBM) that the North claimed to have successfully tested on March 24, in what was the first launch of its kind since 2017

“Spectators gave loud applause, very enthusiastic to see the gigantic Hwasong-17 ICBM that flew into the sky on March 24”, reported the KCNA, on the carrier believed to be able to reach any part of the US territory, even carrying a atomic warhead

The Hwansong-17, known to analysts as the ‘monstrous missile’, was the flagship of a showdown that saw “tactical missile” units, tanks, columns of “strategic missiles” parade last night. a column of “super-large Icbm” capable of “hit in succession” and other vectors

The test of the Hwasong-17 in March, performed under Kim’s supervision, was presented as a “miraculous” launch accompanied by the diffusion of photos and videos in Hollywood mode, with the leader in the role of a Top Gun leading the operations to the appointment with history

Instead, for the American and South Korean intelligence agencies the test uses a Hwasong-15, a less advanced ballistic missile already tested in 2017. The Rodong Sinmun, the voice of the Workers’ Party, has published photos of the parade including those of the Hwasong-17, mounted on a huge 11-axle transport vehicle

The North Korean state network Kctv has started broadcasting footage of the military parade held last night in Kim Il-sung Square, with the footage of spectacular paratroopers in the square, army trucks lined up in the streets and soldiers lined up in battalions ready to the march at the goose step, in addition to the leader Kim Jong-un who presented himself in white military uniform accompanied by his wife Ri Sol-ju