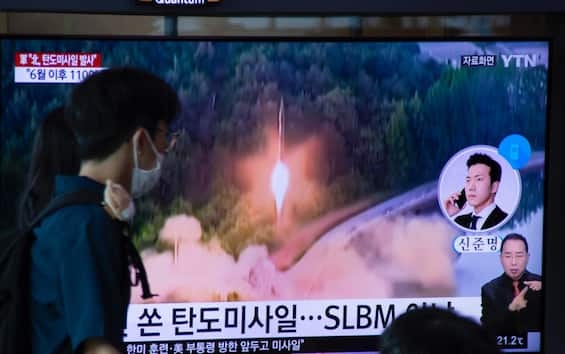 North Korea launched an unidentified ballistic missile into the Sea of ​​Japan. The news was given by the South Korean army. The launch takes place – adds the Seoul army – a few days after the arrival of a US aircraft carrier for joint exercises with the South in a show of force against Pyongyang. South Korea had previously detected signs that the North was preparing to fire a submarine-launched ballistic missile, the president’s office said Saturday, a weapon Pyongyang last tested in May. Today’s launch is the latest in a series of nuclear tests ever so intense, including the launch of a long-range ICBM. “North Korea has launched an unidentified ballistic missile into the East Sea,” the Seoul Joint Chief of Staff said today, without providing further details. The Japanese coast guard also confirmed a probable launch of ballistic missiles, citing information from the Tokyo Ministry of Defense. Ships in the area have been asked to monitor and provide information on any unidentified objects to the coast guard.

The government of Tokyo confirms the launch of an unidentified ballistic missile from North Korea, which landed outside the Exclusive Economic Zone (EEZ) of Japan, the portion of the sea adjacent to the territorial waters, which according to the United Nations Convention extends up to 200 miles. The test took place from the Taechon area, a province north of the capital Pyongyang in the early hours of this morning. The Japanese coast guard has not reported any incidents involving ships or boats. Today’s test follows the launch of 8 short-range ballistic missiles carried out in a single day in early June, and according to analysts comes in response to what Pyongyang considers a “provocation” with the arrival of the nuclear-powered aircraft carrier in recent days. USS Ronald Reagan, in the South Korean port city of Busan, for joint military exercises with Seoul – which Pyongyang regards as preparatory to an attempted invasion of its territory. Washington is South Korea’s main ally, and maintains a military presence of 28,500 in the Asian country.

US Vice President Harris in Japan and South Korea since Monday

From Washington, US Vice President Kamala Harris will arrive in Japan on Monday to attend the funeral of former Prime Minister Shinzo Abe. The visit, Harris’ first in the area, includes a stop in South Korea after Tokyo for a series of institutional meetings. “In addition to honoring the memory of Abe”, who was killed while holding a rally in the center of the Japanese capital, “the trip aims to reaffirm the commitment of the United States to its allies in an increasingly complex situation from the point of view of security”, the Biden administration explained. The vice president’s agenda includes a bilateral meeting with Japanese Prime Minister Fumio Kishida on Monday, a meeting with Australian Prime Minister Anthony Albanese and South Korean Prime Minister Han Duck-soo on Tuesday. Harris will travel to South Korea on Thursday where he will see President Yoon Suk-yeol to “highlight the strength of the alliance between Washington and Seoul and discuss the threat posed by North Korea and the importance of peace and stability in the Taiwan Strait. “stressed the White House.