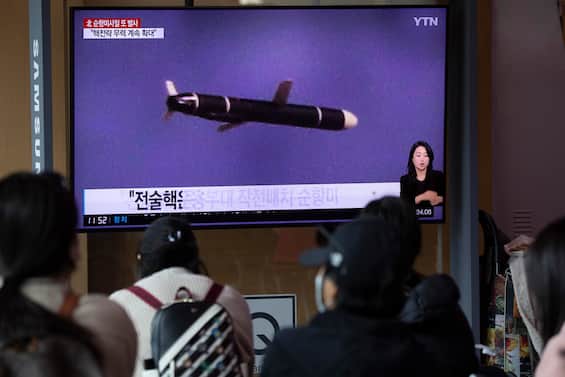 North Korea has launched a ballistic missile towards the Sea of ​​Japan. This was reported by the Seoul military, giving account of a further action by Pyongyang after the two cruise missiles tested about 24 hours ago and the flight of a group of about 10 North Korean military fighters along the border. The launch that took place overnight was also confirmed by the Tokyo government.

The South Korean Joint Staff Command identified the carrier tested by North Korea in the middle of the night towards the Sea of ​​Japan in a short-range ballistic missile (SRBM), also signaling the launch from the Sunan area, near Pyongyang, at 1.49 local time on Friday (18.49 in Italy). “While strengthening our monitoring and vigilance, the military maintains a position of full readiness in close cooperation with the United States,” the Command said in a statement.

Pyongyang military aircraft on the border

The launch came after the North flew about 10 military aircraft near the inter-Korean border from 10.30pm on Thursday until 12.20am on Friday, prompting the South to take off its fighters, including F-35As. North Korean jets flew about 25 kilometers north of the military demarcation line in the central region and about 12 kilometers north of the Northern Limit Line, the de facto inter-Korean border line in the Yellow Sea, never recognized by the hermit state.

On Wednesday, however, Pyongyang had used two long-range strategic cruise missiles, involving units operating “tactical nuclear bombs”, according to the report. Kcna, North Korean news agency. The North also announced on Monday that leader Kim Jong-un had inspected military maneuvers that mobilized active units with tactical nuclear weapons from September 25 to Sunday. The exercises were organized under “unavoidable” circumstances in reference to the deployment of the aircraft carrier Uss Ronald Reagan in the Sea of ​​Japan for the joint US and South Korea naval exercises, reports the Kcna.