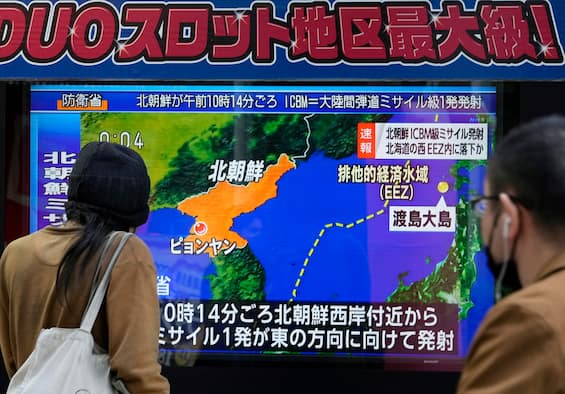 North Korea launched a ballistic missile this morning, as reported by the military in Seoul, according to the Yonhap news agency. Seoul and Tokyo believe it is an intercontinental model (ICBM) and, according to the Japanese Defense Ministry, the carrier, launched around 10:14 local time (2:14 in Italy), would have landed in the exclusive economic zone off the coast of the island of Hokkaido, in northern Japan.

The international reactions were immediate. The launch of the missile “is absolutely unacceptable”, said Japanese premier Fumio Kishida. Noting the absence of reports of damage to ships or aircraft, he confirmed that “the ballistic missile launched by North Korea is believed to have landed in our area exclusive economy (ZEE) west of Hokkaido”. The EEZ extends up to 200 nautical miles off the coast of Japan.

Strong condemnation also of the United States, as stated by the White House: “The president – reads a statement signed by the spokeswoman of the National Security Council, Adrienne Watson – has been informed of the situation and, together with the security team, will continue to consult with allies and partners”. “This launch – he continues – is a blatant violation of the numerous resolutions of the UN Security Council and unnecessarily increases tensions and risks destabilizing the security of the region”. In addition, US Vice President Kamala Harris will hold an urgent meeting with the leaders of Japan, South Korea, Australia, New Zealand and Canada after the missile launch. This was reported by the Kyodo agency. Harris, participating in the Apec summit in Bangkok, Thailand, will meet the five leaders “to consult” on the latest provocation from the North.

“While strengthening our monitoring and vigilance, our military maintains a position of full readiness in close cooperation with the United States,” the South Korean command said in a statement. Today’s move by Pyongyang came in the aftermath of the launch of a short-range ballistic missile, preceded by a few hours by North Korean Foreign Minister Choe Son-hui’s warning that the hermit state would take “fiercer” military actions whether the United States strengthened its “extended deterrence” commitment to regional allies, including South Korea and Japan. The reference was to the trilateral summit held Sunday between US President Joe Biden, South Korean President Yoon Suk-yeol and Japanese Prime Minister Fumio Kishida, on the sidelines of the ASEAN regional meetings in Phnom Penh, Cambodia. The three leaders had agreed to work together to strengthen coordination activities, with the explicit commitment reaffirmed by Biden.