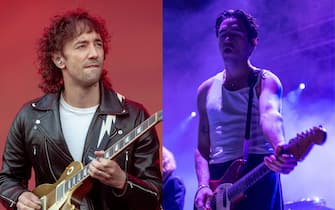 Suitcases ready, next stop Lisbonwhere in a few days the 2022 edition of one of the rock festival most popular summers in all of Europe. From the 6 to 9 Julyas usual on the bank of the Algés river, in Oeiras, Portugal, the festival of art and music will begin NOS Alive

WATCH THE VIDEO: Metallica, 6 curiosities about the group

To welcome even more artists and audiences, NOS Alive has prepared an additional brand new stage for this vintage, the WTF Clubbingwhich will be entirely dedicated to dance and electronic music, all to be danced under the counter and under stage, where internationally famous DJs will perform as guests

Born in 2007, the NOS Alive in Lisbon is one of the most popular music festivals of the European summer, which over the years has been the stage for important names in the international rock and indie scene and not only. Here are the artists who will arrive this year on the Oeiras stage, for the 14th edition of the festival after the pandemic stop

NOS Alive starts immediately by playing a real musical ace. On the stage set up in the open for the concerts on July 6, The Strokes with Julian Casablancas, Nick Valensi, Albert Hammond Jr., Nikolai Fraiture and Fabrizio Moretti as headliner

The Strokes, the most famous songs

The inaugural day of NOS Alive continues with i War on Drugsthe famous American indie-rock band, born in 2005 in Pennsylvania and highly appreciated by the international public for hits such as Red Eyes, Thinking of a Place, Under The Pressure And Pain

As emerging as they are already highly appreciated in the international music scene, especially the indie-rock and post-punk one of which they represent. THE Fontaine DC will be guests of the 14th edition of NOS Alive, on 6 July 2022

Florence Welch’s fiery red hair will also arrive in Lisbon, where the singer will perform as the headliner of NOS Alive 2022 with her Florence and the Machine. The award-winning British group and its extreme versatility between pop, indie and rock will take the opportunity to present to Oeiras all the hits of the latest album Dance Fever released on May 13, 2022

At NOS Alive Lisbon 2022 also the Oxford group of Glass Animals. The band will play on July 7, without forgetting, among others, the success of Heat Wavesstill very strong in streaming and radio two years after its debut

Last June 4th he enchanted the English and non-English audiences with his performance on the cover of Wonderful World by Louis Armstrong, at the Platinum Party At The Palace for Queen Elizabeth II’s Platinum Jubilee. Now, the very young singer-songwriter Heavenlyis preparing to surprise with his voice also the public of NOS Alive in Lisbon, where he will perform next Thursday 7 July

Not only Florence and the Machine, Glass Animals and Celeste, on 7 July at the 14th edition of NOS Alive also Jorja Smith, Alt-J, Dino D’Santiago, Nilüfer Yanya, Seasick Steve And Batida B2B Branko

The penultimate day of great music in Lisbon for NOS Alive 2022 will be a real burst of rock and pure energy because playing on the stage set up in Oeiras, on the bank of the Algés river, will be the Metallica. The appointment with the headliners is for Friday 8 July

WATCH THE VIDEO: Metallica, 6 curiosities about the group

To greet the arrival of the second summer weekend of July at NOS Alive, also the British rapper Stormzy

British music will be the star of NOS Alive Lisbon 2022. The Brighton rock band will also be on stage Royal Blood with Mike Kerr and Ben Tatcher and the hits of Figure It Out, Oblivion, Honeybrains, Out of the Black, Lights Out and many others

Among the most anticipated artists of the Portuguese festival NOS Alive, on Friday 8 July, also the British rapper MY and the American singer-songwriter and multi-instrumentalist St. Vincent

They will close the rich list of artists at the NOS Alive in Lisbon, on July 8, Tom Misch, Moses Sumney And Sea GirlS

After the huge success of the I-Days in Milan, last Saturday 11 June, the Imagine Dragons continue their rich European tour which will also stop in Lisbon. The appointment with the NOS Alive that awaits them as headliner is with the last day of the show on Saturday 9 July

Many have only recently met them, thanks to the huge success of Alana Haim in Licorice Pizza by Paul Thomas Anderson, others have enjoyed them for a long time now. The Haimformed by Alana, Danielle and Este Haim, will star in NOS Alive Lisbon on July 9th

On 9 July, to round off NOS Alive 2022, too From Weasel, Two Door Cinema Club, Phoebe Bridgers, Caribou, Parcels, Mother Mother And Hope Tala as well as a constantly updated calendar ready to welcome many other artists to Lisbon