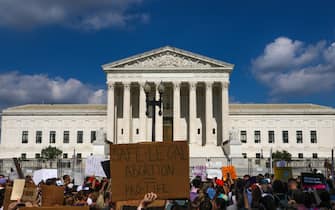 There Supreme Court of the United States has abolished the 1973 Rae vs Wade ruling, which has made abortion de facto legal at the federal level for the past 50 years. A historic decision, but not the only one of crucial importance for rights in the country expected by the highest American judicial body

WATCH THE VIDEO: US abortion, protesters: they have taken away our freedom of choice

The court – controlled by a majority of 6 out of 9 conservative judgesincluding 3 nominated by Donald Trump – by the beginning of July it could pronounce on other fundamental issues including the environment, the relationship between state and religion and the right to vote

US Supreme Court abolishes sentence for right to abortion: reactions

ENVIRONMENT – In a case pitting the state of West Virginia against the Federal Environmental Protection Agency (EPA), the Supreme Court could limit the agency’s ability to enforce regulations applicable to multiple power plants

Supreme Court cancels the right to abortion: what changes from today

According to the Federalist Society, an influential right-wing conservative group that often contributes to judges’ ratings, government agencies should not impose rules that have not been specifically approved by Congress. The detractors, on the other hand, believe that parliament cannot take care of everything and that regulatory authorities must have flexibility to protect the citizen

Right to abortion in the US, from the Roe vs. Wade to abolition: the stages

RELIGION – At the center of the dispute is the case of a former football coach from a high school near Seattle, fired for praying on the pitch at the end of his team’s game. He claimed his religious freedom, protected by the First Amendment, but the school district claims he was pressuring team members to participate in prayer.

Generally, when the interests of government entities conflict with those of religious groups, the Supreme Court tends to marry the latter. And this may be even more true of the right-wing majority of the Courtwhich has already shown a strong desire to protect religious freedom

It happened in the very recent ruling against the State of Maine program, which among private schools excluded religious schools from state funding of education for students living in remote areas without public schools. (In the photo: the 9 judges of the Court)

A decision that “continues to dismantle the wall of separation between church and state wanted by the founding fathers “, commented one of the judges who voted against

VOTE – The autumn session is also expected to be hot, when the judges have already decided that they will deal with cases on affirmative action (aimed at ending or correcting the effects of a specific form of discrimination) on voting rights and on a dispute between freedom of religion and LGBT rights

After cancellation of the Rae vs Wade ruling, finally there are those who fear that in the future the Supreme Court could concentrate – in a restrictive way – on gay marriage, LGBT rightsthose to contraception and in vitro fertilization