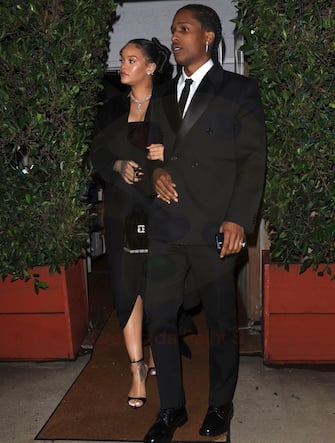 The night of the Golden Globes Rihanna, accompanied by her partner A$AP Rocky, she showed off a magnificent haute couture dress in black velvet with a train. The singer embellished her look with a Cartier diamond-encrusted necklace

At the 2023 Critics Choice Awards in Los Angeles Julia Roberts she wore a custom made black dress decorated with gold and silver sequins along the neckline and sleeves, a suggestive reference to the sunbeams

Beyoncéqueen of the 63rd edition of the Grammy Awards with the victory of four awards and the achievement of the record of most awarded woman in the history of the musical event, wore a black draped leather mini-dress with a deep neckline, combined with long gloves that revealed a golden nail art en pendant with the geometric earrings

Rolling Stone chooses the 200 best singers of all time. The top 20

For President Joe Biden’s inauguration ceremony, Lady Gaga wore a custom Schiaparelli Haute Couture “cape dress,” designed by Daniel Roseberry. The fairytale dress, in two-tone red and black nuances, has a train and is decorated with a golden dove, symbol of peace

At the event of variety power of women, Katy Perry she showed off a lilac dress with baroque volumes and a dreamy atmosphere. The puff sleeves, which leave the shoulders uncovered and fall over the long gala dress, added a touch of glamour

Not only Shakira, the stars who have dedicated a song to the ex

Protagonist of the 79th Venice Film Festival, Cate Blanchett stole the show with a black velvet ensemble consisting of wide cut long pants and a back tie bustier embellished with 3D wildflower decoration

Cate Blanchett at the Venice Film Festival in Schiaparelli. PHOTO

On the red carpet of the Cannes Film Festival Bella Hadid she showed off a long black crepe dress with long sleeves and a very deep V neckline, filled with a massive golden necklace with coral reminiscences

From Chiara Ferragni to Gigi Hadid, the stars in love with pizza

For the televised performance in Adele: One Night Onlysinger Adele she shined in a custom look, a black silk maxi gown topped with a gathered bustier

Lizzo, the singer would like to make a song with Adele: “My idol”

He also wore creations from the maison Zendayaidol of Gen Z, who has created a cheeky look thanks to a gala dress with tulle flounces shaded in shades of black, red and purple

Critics Choice Awards 2023, all the winners

Goblin Mode, 12 VIPs who have the courage not to show themselves at their best

During Paris Fashion Week, the pop star Rita Now sported a blue satin dress with a plunging neckline and thin straps, embellished with a silver clutch

Rita Ora, dressed as a bride, promotes “You Only Love Me” on TikTok

Sitting in the front row at the fashion house show, Emma Watson created a captivating mix of luxury and streetstyle, wearing a pair of gray skinny jeans and black leather Dr. Martens ankle boots under the black blazer with monumental shoulder pads