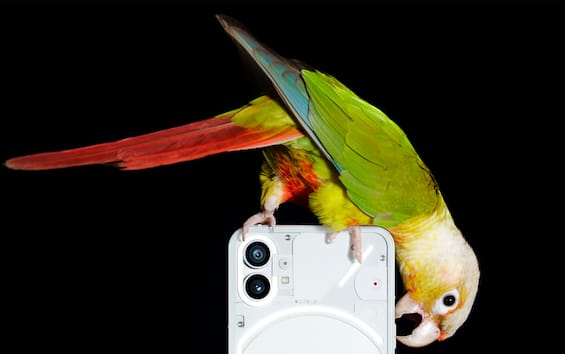 When, in 2020, Pei Yu, better known as Carl Pei, left OnePlus seven years after having founded it with Pete Lau, he already had in mind to get back into the game with a new, exciting adventure. The path was traced and always led to the same concept: to bring people as close as possible to technology, innovating and evolving ideas without trivializing them.

No, not at all, but people like Pei don’t have to like easy things that much. From those concepts, in fact, Nothing Technology was born. It was 2020 and the world was already hanging on the lips of this genius, half Chinese half Swedish who had just turned 30 and had no desire, even if he could, to rest on his laurels. Two years later we have in our hands the first smartphone of this company which is based in England.

A phone that lights up

The aesthetics are inspired by the most recent Apple products, the aluminum profile as well as the rest of the frame, the perfectly symmetrical frames of the display, which, at least here, does not have the notch, the arrangement of the two cameras at the rear, everything. refers a little to iPhones. But right at the rear is what makes this Nothing Phone (1) something exclusive. The glass of which it is composed, in fact, is transparent and allows a glimpse of some of the components of the phone. Then, set in a crowded back room, between the wireless charging cables, there are 900 LEDs that can be used for notifications, ringtones, keep the rhythm of the soundtracks of our lives or simply disturb the sleeps of friends and acquaintances. The possibilities to customize the sequence of lights are many and will take up at least the first post-purchase week. After that, however, we come across a smartphone that is certainly not revolutionary.

Nothing Phone (1) is powered by Qualcomm’s Snapdragon 778G + 5G, a 2.5 Ghz octa-core coordinated with 8 or 12 GB of RAM with 128 or 256 GB of non-expandable internal memory. A medium range, in short, with a practically stock version of Android 12 and a minimal customization given by Nothing OS and its Glyphs, an operating system on which Pei had artfully created enormous expectation, which in the end did not thrill except for the updates of constant and punctual security guaranteed for at least 4 years and assistance at least up to Android 15. In any case, even with some uncertainty due to a software that is still immature, the user experience is very satisfying, comparable to a top of the range. This is due to the processor, of course, but also to those who have chosen to aim at it, avoiding turning the smartphone into a red herring with a useless and expensive top processor. Navigation is always fluid, i lag limited and understandable since they occur only for a few moments and only after hours of stressful hyperactivity. Something more we would have expected from the display: a huge 6.55-inch OLED, therefore not LTPO, with FullHD + resolution, support for HDR10 +, frequency up to 120 Hz and brightness that, according to the house, goes up to 1200 nits . In fact, apart from the deep blacks, it didn’t thrill us. A panel of this size generally gives emotions, the ones we have not experienced. The colors are soft as on a canvas by a “pointillist” and it is no coincidence that the information in the various menus are compositions of vintage dots but, at least in this case, effective and, above all, original.

Two rear cameras both of 50 megapixels. The main one is a Sony with optical stabilization; for the wide angle, from 150 degrees, Nothing has relied, instead, on Samsung. In both cases the photos are of quality unless you want to overdo it with zoom over 2X or in low light. The front one is 16MP and has a good performance especially with natural light. On average, videos that go up to 4K 30 frames per second but it is better to stop at Full HD if you also want to count on good stabilization. The interface is simple and effective, with few functions, those you need in short, not one more.

With a 4,500 mAh battery, the autonomy is surprising: with Nothing Phone (1) we always arrived in the evening and if you want to stay in the small hours you can always count on the possibility of recharging quickly: up to 33W or 15W in mode wireless but do not look for the charger, that must be purchased separately. Minimum protection which is IP53 and therefore protects only from dust and splashes while the audio is stereo, of great power and good quality up to 60 percent of the volume.

Finally, the price: € 499 in the 8/128 version, € 529 for the 8/256 version and € 579 for the 12/256 version, right for a mid-range, even more so if modular and with distinctive elements such as the rear LEDs, Glyph interface, almost entirely recycled construction materials and reverse charging up to 5 watts.