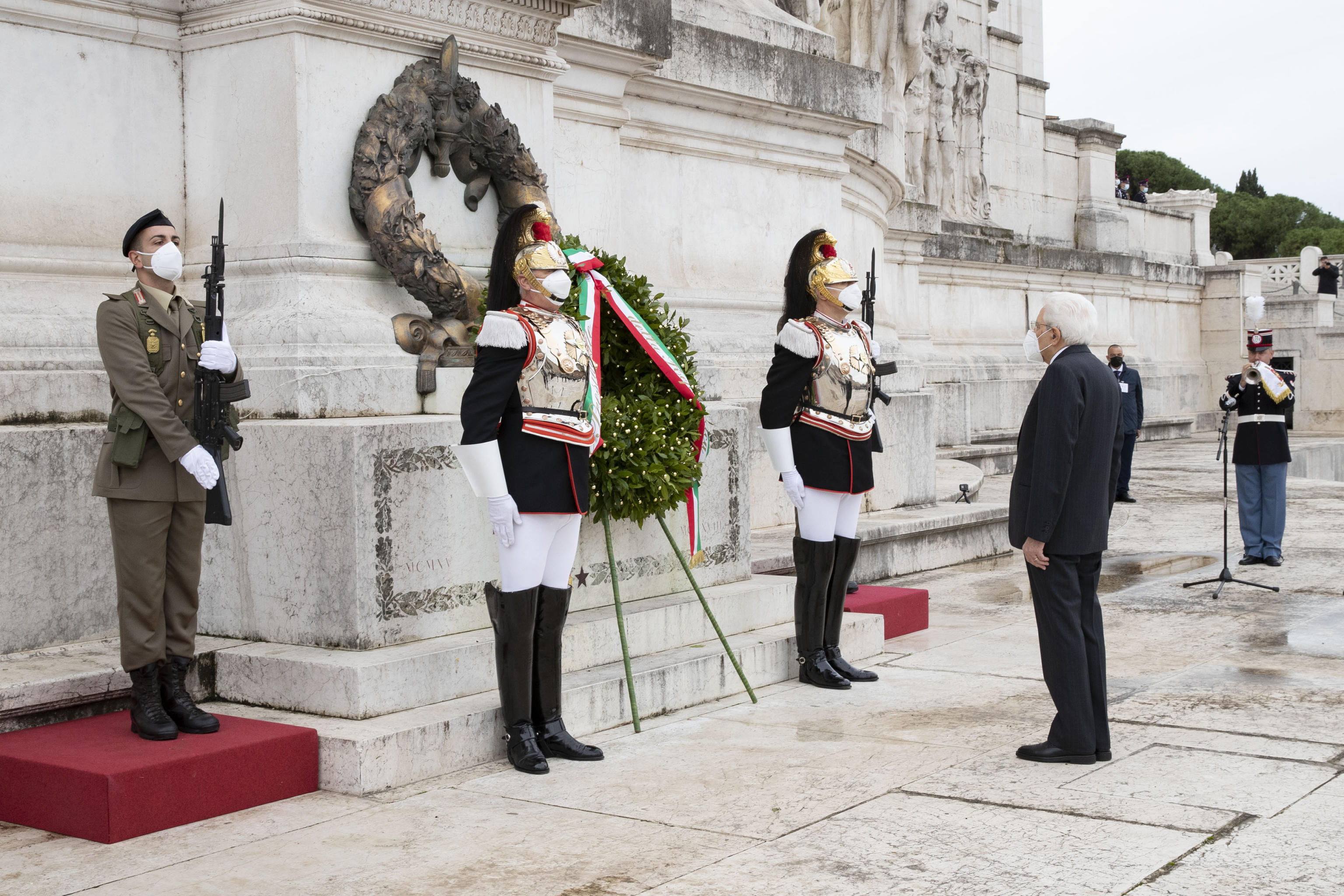 The President of the Republic visiting the Altare della Patria: “On this day our thoughts go to those who have suffered, to the point of extreme sacrifice, to leave a united, independent, free and democratic Italy to the younger generations”. Feelings of pride and gratitude were expressed by Prime Minister Mario Draghi and by the Minister of Defense himself

A procession to Piazza Venezia to celebrate the “Unknown Soldier” just 100 years after his burial. A procession that reminds the Italian people that November 4 is the day of National Unity and the Day of the Armed Forces. Accompanying the head of state, Sergio Mattarella, who laid a laurel wreath at the Altare della Patria, premier Mario Draghi, Defense Minister Lorenzo Guerini, the president of the Senate Elisabetta Casellati, and the military authorities. A ceremony that ended with the flight of the Frecce Tricolori.

“On this day our thoughts go to those who have suffered, to the point of extreme sacrifice, to leave a united, independent, free and democratic Italy to the younger generations. The entire Italian people looks with emotion at all the victims of wars. Their memory represents the deepest and most sincere stimulus to fulfill the duties of Italian and European citizens – writes Mattarella in a message addressed to the Minister of Defense Guerini and then adds: “Our history is marked by the tragedy of the First World War: in pain shared, a feeling of inextinguishable brotherhood has been cemented between the country and citizens in uniform. Men and women in uniform are always ready to lavish their precious commitment in carrying out the tasks assigned to them by Parliament and Government, at the service of the international community in operations peacekeeping and, on the national territory, alongside the other components of the State. Soldiers, sailors, airmen, carabinieri, financiers and civil defense personnel, your work, an expression of value, professionalism and dedication, is recognized and appreciated on a daily basis The Republic knows that it can count on each of you and on the indissoluble oath ento of fidelity that you have lent. To all of you and your families on this occasion I address the most cordial wishes and affectionate greetings of the Italian people. Long live the Armed Forces, long live the Republic “.

Dragons, we honor the military who guarantee security and freedom

Sentiments of esteem and gratitude were expressed by the Prime Minister, Mario Draghi who honored “the spirit of service with which the military guarantees our security and our freedoms. They did so in Afghanistan and in many other parts of the world, with professionalism, dedication and capacity for dialogue. And in Italy, in the vaccination campaign against Covid-19 “. The premier then thanked “all the women and men involved in our country and abroad. We are there and there we feel neighbors. Today, as in the past – he concluded – we need your courage and your humanity “.

Guerini, pride and gratitude for the work of the armed forces

Sentiments also shared by the Minister of Defense Guerini: “Celebrating November 4 – he says – does not only mean recalling the deeds of those who offered their lives to achieve and defend the unification of Italy, for the good of the national community and the country but also recognize the commitment of all of you who serve the Republic in the armed forces, sharing the same values ​​as those who preceded you, with the same enthusiasm and the same ideals “. Guerini also addressed a thought” to the families of our fallen, to the wounded in service and their loved ones, with affection and gratitude, aware of the suffering that many still endure today “.

The messages of political leaders

of FI, wrote on social media: “Pride, humanity, courage. We love Italy with all our strength” while Giorgia Meloni, president of FdI, expressed eternal gratitude “to those who sacrificed their lives for Italy”. Caterina Bini, Undersecretary for Relations with Parliament and member of the Democratic Party, thanked those who “with discipline, sacrifice, honor and humanity carry out an activity to protect the safety of citizens and which gives prestige to our Republic all over the world “.