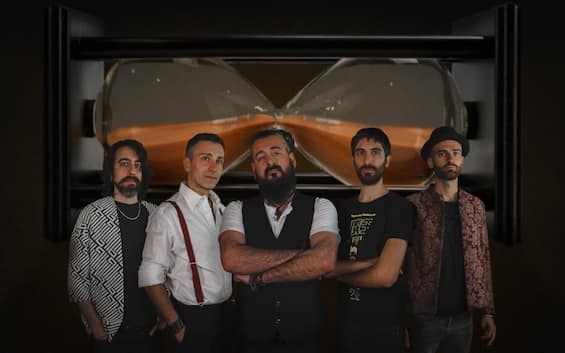 Hourglass it’s the new album by Nuju, in Calabrian none, published by Manita Dischi with Manita/iCompany/Sud Studio editions. The album was born about four years later True stories of a ghost ship and is the sixth album of the band of Calabrian origin but “resident” in Emilia. The eleven songs that make up the album had a long gestation, also interrupted by the two years of the pandemic. At the end of the recordings, however, it was clear that each song spoke of time and its variations, with the inevitable irony that distinguishes the band. I explored the topic with Marco “Goran” Ambrosiwho takes care of guitars, bouzouki and choirs in this project.

Marco took a long time to build the Hourglass of Nuju: now that she’s finally free where does she take us?

We started recording before the pandemic and in fact the first two singles came out at that stage. While we were writing we realized that in almost all the texts the word time came up again: that changes, that returns, lived in a frenetic way and that in any case is linked to social issues, in particular to the policy of redistribution of money and to climate change.
Have you ever had the doubt that the time machine would be more powerful than an hourglass?

Never actually thought about it. What we do is concrete, the time machine looks like a sci-fi element. We try to decline time in our favor. For us it is a concrete concept because we tell the reality that surrounds us.
Already Giorgio Gaber didn’t feel Italian, now you’re ashamed of it: hasn’t anything changed? Mr. G’s piece was published a few days after his death and it’s been twenty years. Are you also Italian, fortunately or unfortunately? Even if the last verse reads “don’t leave me here”.

Times have changed even more compared to 20 years ago. Some time before Gaber had written Right and left: at the time we understood more where we were and the ideal place to fit in. Our shame refers to when Italians rape the Constitution. The founding fathers came out of the Second World War and the Resistance. We wonder if today it is right to follow contemporaneity; we are happy to be Italian and tied to our cultural roots. The final sentence is critical of social media: the message is help us get out of the network, it is a hymn to the community and a criticism of individualism.
Are you more afraid of this dark forest or Dante’s forest?

That was a dream, today’s is real and scarier. Today we are fishing for nightmares: there was fascism and for this reason we should all be anti-fascists. Fear is for new things, for sovereignty and nationalism, for unbridled capitalism.
Treating life with kid gloves is either an individual matter or society must enable you to do so?
We think it is an individual but collective concept. Already we are Nuju or, which can refer to the Nobody of Ulysses as to theOne None One Hundred Thousand by Luigi Pirandello. The group and collaboration make the community grow.
“You five thousand friends and you don’t meet them”: sociality is precisely one of the problems of this era, too many lives of others and too much showing one’s own. You say that when traveling you no longer look out the window. But now there are no more cell phones in the classroom: is this a starting point?

We know what’s wrong, we need a license for cell phones. As there is a speed limit, there should also be a time limit for cell phones.
Above the equator, points of view and perspective are reversed, below the equator they would like to turn the world upside down: is the bottleneck of the hourglass the meeting point? And that the equator of brotherhood and acceptance?

That hand that grips the center of the hourglass is the same one that should take control of one’s destiny and make choices. Now there is also a gap between East and West, at least to a lesser extent. But stimuli for growth can come from the southern hemisphere: let’s help each other to change things.
What’s in between I’m lost and Lost time: are we still lost in another universe or do we start by changing destiny since changing nature is not possible?

Let us reflect on the fact that everyone has life conditions that are born with him. Is it possible to change them? If we don’t do it, it’s a waste of time, if we succeed, we improve.
both in Credits that in Time Lost we talk about waiting: is it a theme that worries you?

Waiting is the time to think, then we are restless by nature. Our first album dates back to 2010 and in 2023 we reached six and over three hundred concerts. But every now and then we need to stop and look at what is happening around us and understand how to take new steps.
Which old record plays for you?

An album like Creuza de Ma it is important to the band’s ethnic roots. Then Rino Gaetano with My brother is an only child. Old records are used to understand what good has been done and to revise it to our liking. Also Sgt. Pepper’s by the Beatles plays a central role for Nuju.
That’s enough it is a song of unusual hardness and I quote Giorgio Gaber again with Il Dilemma: Is it difficult to be a couple today?
Yes, because we often forget that we grow up together. Sometimes the desire to mingle and understand the other is questioned. I am part of an established couple, I am a father but observing the young people we see that the couple struggles to face the difficulties of daily life.
Spin it is a piece of profound concern. Would you like to stop the world from waiting for those who are late in life? Or are we on the edge of the world and of life itself?

Sometimes we stop and wait. We don’t all have the same times. Whoever understands first must stop. Those who reach the top often believe they no longer have to explain anything. Here is the essence of the community.
The idea that a country is needed has been expressed very well, in my opinion, by Cesare Pavese ne The Moon and the Bonfires. Are we more roots or scars today?

The real difference is not between North and South but between the ability to be a community or not. The idea of ​​a family waiting for you is very Italian. If I look at the exhibition I think of Ndrangheta and carelessness which are among the many scars in our Calabria: but, by changing the name, you can find them everywhere.
What will happen in the coming weeks?

In the spring we start on tour between Italy, France and Germany. Hoping there is an opportunity. We define our live comedy-drama because it makes us think while having fun.