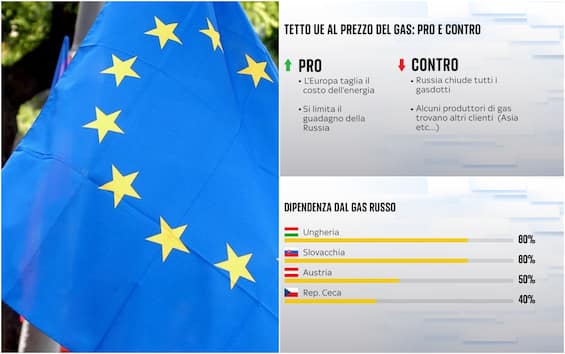 Brussels is preparing to approve an energy saving plan. On the table, for example, is the reduction in electricity consumption, while once again there are no prospects for an agreement on the price cap for gas. This is the topic at the center of the latest episode of the Sky TG24 format dedicated to the upcoming political elections, broadcast from Monday to Friday from 18.30 to 19.00.

We are in the middle of a decisive week for the energy dossier. Tomorrow, September 14, the European Commission will discuss the mandatory cut on electricity consumption, both for families and businesses, and on the taxation of the extra-profits of companies that produce electricity from sources other than gas. The price cap for gas, dear to Italian politics, will not be approved. This is the topic at the center of the latest episode of “Numbers – The challenge of voting”, the Sky TG24 format dedicated to the upcoming political elections, broadcast from Monday to Friday from 6.30pm to 7.00pm (SKY TG24 SPECIAL: TOWARDS THE VOTE – ALL VIDEOS – CASA ITALIA: INTERVIEWS WITH POLITICAL LEADERS – NUMBERS – THE CHALLENGE TO VOTING – FIND YOUR PARTY: THE SKY TG24 QUIZ).

Rome already has a national energy saving plan ready. Among the measures envisaged are the forecast of the use of greater quantities of coal and diesel for the operation of the plants, the reduction of consumption and the promotion of virtuous behavior. The aim is to save 8.2 billion cubic meters of gas. Looking at Europe, one wonders how the plan on the table in Brussels could be put into practice, aiming to reduce electricity consumption by up to 10%. For example, you may have to use fewer appliances at the same time during peak hours, when the price of energy increases.

The ceiling on the price of gas

In Italy for months there has been talk of a price cap on the gas to be purchased. What would it mean in practice to have a ceiling on the price of gas? Today, the cost on the Amsterdam market has come close to 200 euros per megawatt hour. If Europe were to fix the price cap – a proposal made several times in Europe also by Prime Minister Mario Draghi – it could tell suppliers that it does not intend to pay more than 50 euros for gas, to give an example. It would therefore be the buyer to set the maximum price. With positive and other negative aspects. Europe would spend less and cut the cost of energy, while going to finance Moscow to a lesser extent. On the other hand, Russia could decide to close its pipelines completely, as it has already threatened to do, and other gas producers (such as Qatar and the United States) could decide to sell their stocks to non-European countries willing to pay. more money for supplies.

Who is against the price cap

The countries most opposed to the price cap hypothesis, more than Holland and Germany – as we often hear – are Slovakia, Hungary, Austria and the Czech Republic, which depend on Russian gas for their stocks more than any other state. Budapest and Bratislava receive 80% of the gas they use from Moscow, Vienna and Prague about 50%. But according to Alessandro Lanza, professor of Energy Policy at LUISS University, the price cap would be out of the European negotiations, above all because “it has never been the subject of serious discussion, no one has ever understood what it meant”. To set a ceiling on the cost of gas, explains Lanza, “you have to agree with the suppliers, it cannot be set by the buyers. Europe has wasted months on an issue that never existed ”.

A major theme that runs through Europe is that of energy solidarity: if a country ran out of gas, who would give it to it? Almost absent in the Italian political debate, the question is more felt in other chancelleries. Like in Berlin, where Moscow’s supplies are already much lower than elsewhere. Only two countries, Austria and Denmark, have so far signed solidarity agreements with Germany in case of emergency. Then there is France, with which Berlin exchanges electricity, a front on which it is Paris that has difficulty. Rome, at the moment, has gas: it has equipped itself to get it from other suppliers – such as Algeria, Norway and Qatar – and looking for example at regasification plants.

Why electricity is so expensive

The price of electricity has also increased dramatically in recent months. It is the result of a system in place for years, whereby the price of electricity – generated in different ways, from wind to gas – is determined on the basis of the cost of the most expensive source with which to produce it, which at the moment is precisely the gas.