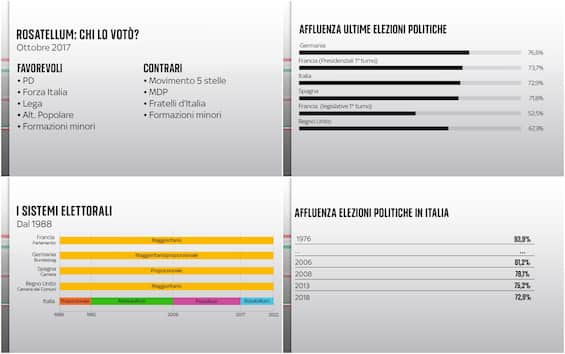 The electoral system currently in use is the fourth adopted by Italy in the space of 30 years. However, this is a complex mechanism that risks creating confusion and not making the voter understand the effect of their vote. These and other issues at the center of the first episode of the new Sky TG24 format dedicated to the upcoming political elections, broadcast from Monday to Friday from 18:30 to 19:00

While other large European countries maintained the same electoral system for decades, Italy changed four. The last one, the Rosatellum, on the basis of which the new Parliament will be formed after the elections on September 25th, has been in force since 2017. Which parties, when it came into force, voted for it? These and other issues were at the center of the first episode of “Numbers – The Challenge of the Vote”, the new format of Sky TG24 dedicated to the upcoming political elections, broadcast from Monday to Friday from 18.30 to 19 (TOWARDS THE VOTE, THE UPDATES IN LIVE – SKY TG24 SPECIAL – ALL VIDEOS).

Since 1988, France, Germany, Spain and the United Kingdom have never changed the electoral system, albeit with some minor changes. Paris and London have chosen the majority, Berlin the mixed, Madrid the proportional. In these 34 years, Italy has changed four electoral systems: until 1992 it was voted with the proportional, from 1992 to 2006 with the Mattarellum (mixed, but strongly inclined towards the majority), from 2006 to 2017 with the Porcellum (proportional with majority premium and blocked lists) and then with the Rosatellum.

The Pd, Forza Italia, Lega, Alternativa Popolare and other minor formations supported the Rosatellum. Instead, the Five Star Movement, Mdp, Brothers of Italy – Giorgia Meloni at the time spoke of a system that leads to a “fake democracy” – and other smaller parties were opposed. Many still emphasize its complexities today. The fact that it provides for the allocation of seats following the majority method rather than the proportional one, according to the director of YouTrend Lorenzo Pregliasco, “complicates the application of the law”. Another factor that makes it particularly articulated is the fact that “on the one hand we vote for parties, on the other for coalitions,” says Pregliasco. The resulting system is more “confused” than in other countries and “does not help the voter understand the effect of their vote”, concludes the pollster.

What would happen if we went to vote today

According to the latest survey conducted by Quorum / YouTrend for Sky TG24, if you voted today, the first party would be Fratelli d’Italia (24.1%). Together with 13.8% of the Lega, 8.7% of Forza Italia and 1.9% of Noi Moderati, the center-right coalition would thus gain 48.5% of the favors. The opponents of the center-left would instead take home 29.5% of the votes, led by 22.7% of the Democratic Party, the second largest party in Italy. Green Europe-Italian Left would get 3.2%, + Europe 2.9% and Civic Commitment 0.7%. The Five Stars would bring home 11.1%, the Third Pole (Action and Italia Viva) 5.3%, ItalExit 2.5% and Unione Popolare 1.2%. With these percentages and this gap between center-right and center-left, explains Pregliasco, it is plausible to expect that about 60% of the seats in the House and Senate will go to the first of the two coalitions.

Very high, at 38.3%, are the percentages of those who say they are undecided about who to vote or those who declare that they will abstain. Perhaps also because the confidence of Italians in politics is low: 78% say they have “little” or “none”, while 17% of Italians would continue to want Mario Draghi as prime minister.

The problem could also be generational. For 84% of those interviewed, the political class is not dealing with issues close to the youngest, despite the fact that these are topics of great importance: work, education, climate change. The party that best represents rockets and girls for 16% of those interviewed would be the Democratic Party, followed by Fratelli d’Italia (13%), Cinque Stelle (12%) and Lega (9%).

Few at the polls

In Italy it is estimated that the turnout for the next elections could be between 65 and 66%, six to seven points less than the 73% recorded in 2018. If this were the case, from 1976 (year of record participation, to 93 , 9%) to date the figure would have dropped by almost 30 points.

The turnout in Europe