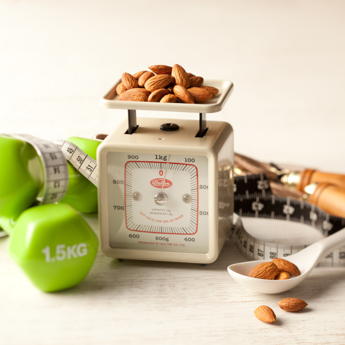 The properties of almonds, which can help keep blood sugar levels more stable and reduce the number of calories consumed throughout the day

Almonds ‘in the field’ for health and against obesity, one of the main public health problems globally both because its incidence is constantly increasing, and because it constitutes a significant risk factor for various chronic diseases, including cardiovascular diseases, type 2 diabetes and the metabolic syndrome.


March 4th on the calendar coincides with World Obesity Day. In Italy, according to the most recent estimates by the Istituto Superiore di Sanità, 4 out of 10 adults are in a state of excess weight: 3 overweight and 1 obese.

Although it is the result of the interaction between different components, some of which are of genetic origin, a healthy diet associated with an active lifestyle remain the steps to be taken to make a difference in the prevention of obesity and its consequences.

An adequate and balanced diet, in fact, not only ensures a correct supply of nutrients capable of satisfying the body’s needs without gaining weight, but can also allow the intake of substances that play a protective or preventive role against certain pathological conditions. .

A recent study, sponsored by the Almond Board of California, showed that an almond-based morning snack (as opposed to a common, high-carb option) helps keep blood glucose levels more stable and reduces blood sugar. number of calories consumed during the day. The results therefore indicate the possibility of obtaining a prolonged calorie reduction, with consequent weight loss.

In this study of 100 New Zealand adults aged 18 to 65, participants consumed at least 42.5g of unroasted almonds or a sweet snack of equal calories (the most popular snack according to a survey). Both snacks accounted for 10% of the total calorie intake, so in some cases the amount of snacks consumed was greater.

The results showed that the glycemic response was lower among participants after the almond snack compared to the cookie snack.

No differences were found in the amount of calories consumed at lunch after the almond or cookie snacks. However, based on the participants’ food intake records, those who ate the almond snack reported eating ~ 150 fewer calories (on average) over the course of the day. If maintained, this calorie reduction could theoretically translate into about half a pound of weight loss per month.

The observations from this acute study are consistent with the results of a previous study published in the European Journal of Nutrition. The researchers found that a mid-morning snack of almonds (42 g), compared to no snack, helped control appetite and led to fewer calories consumed at lunch and dinner. The results of this previous study suggest that, instead of skipping a snack, consuming almonds mid-morning can help control hunger.

“Excess weight is a recognized risk factor, be it overweight or obesity. It has a multifactorial origin, that is, there are some contributing causes that lead to exceeding the limit threshold of well-being and to have, therefore, more propensity to “override” in the critical area of ​​the disease up to chronicity, favoring for example cardiovascular and metabolic pathology , dyslipidemia, diabetes.

Weight gain is facilitated by the so-called “obesogenic environment”: low physical activity, habits of the family / social circle, abundance of food, but also availability of the same of poor quality, often at low cost. Among all this, it is certain that what we eat makes a difference ”, says Dietitian Ambra Morelli.

“From a strictly nutritional point of view, it will therefore be necessary to change our behaviors, starting to diversify our choices. Learning to eat, satisfying ourselves adequately, giving space to plant foods such as fruit, fresh and dried, vegetables, and introducing, if not already done, breakfast. We improve the quality of our between meals, choosing from the healthiest ones, such as almonds. Consuming almonds, according to the most recent studies, promotes weight control, also through the acquisition of a long-term sense of satiety. Also, if obesity and diabetes coexist, glycemic stability will be an important factor to keep in mind. Scientific evidence shows a facilitated glycemic control thanks to the substitution of different kinds of snacks with an almond snack that can easily be included in the weight management plans “.

The nutritional profile of almonds, which contain vegetable proteins (6g / 30g), fiber (4g / 30g), good unsaturated fats, important vitamins and minerals such as vitamin E (7.7mg / 30g), magnesium (81mg / 30g ), potassium (220mg / 30g), yields a 30g handful (about 23 almonds) – several times a week – a great alternative for an energetic and healthy snack, which helps you stay on track between meals and other and, in the context of a healthy diet, will not adversely affect weight.