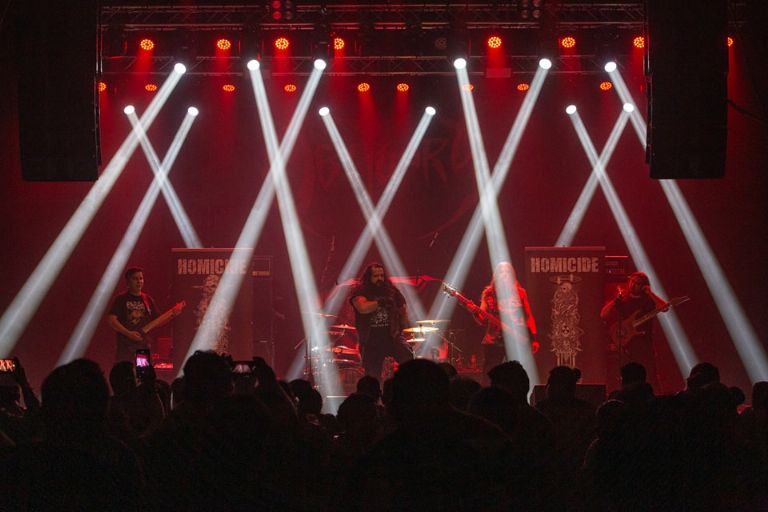 At about 18:00 and with a handful of people in the coliseum of San Diegothe Chilean band homicide was in charge of the preamble and gave a powerful and dark welcome to the fans of obituary. The natives of Quilicura were on stage for almost 60 minutes and proposed a powerful show, full of lights and, at the same time, aggressive that was appreciated by all the attendees.

Back were the ones who took care of the second round before with a show where the ‘Pear’ Stable interacted with fans to continue supporting these types of concerts and festivals after more than two years of the COVID-19 pandemic that suspended several shows and left several people in the industry abandoned. “It’s going to be almost 40 years that we’ve been playing and we feel like an emerging band”counted Rodrigo ‘Pera’ Cuadra unleashing the laughter of the attendees in a presentation that lasted an hour and a half approximately.

In the loudspeakers was heard “Balls to the Wall” of Accept Y “Touch Too Much” of AC DCbefore it was heard “Snortin’ Whiskey” of Pat Travers for the natives of Tampa, Florida to leave at 9:00 p.m. For a little over an hour the vocalist of obituary, John Tardywith their classic and distinguished guttural sound together with their own, covered part of their discography as part of their tour “Complete Control Tour of Latin America 2022”.

In a little over an hour, the creators of cause of death they demolished the Cariola, causing people to crowd into each sector of the enclosure, moving their long hair. The venue was humid and hot, but that did not stop a day full of death metal from one of the most recognized bands of this genre, where even late He allowed himself to be hugged by a fan and showed a Chilean flag to the public after one of his followers passed it to him.

It should be noted that the North American band had performed on friday september 30 in Conceptionbeing the first date on Chilean soil before disembarking in Santiago then play this Sunday at The egg of Valparaiso.

Photo gallery of Obituary in Chile

Chronicle and photos of Bastian Cifuentes. On Instagram @periodistafurioso