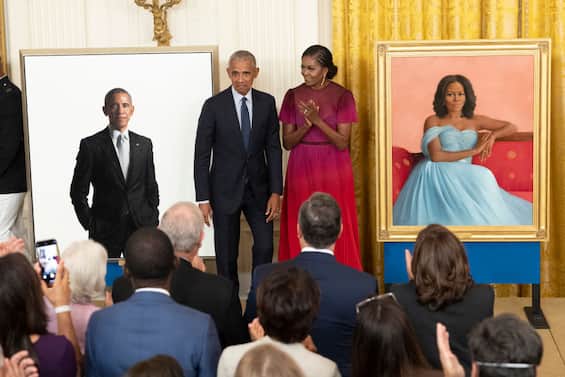 “We miss you so much,” the former American first lady began, addressing the staff of the president’s residence. “We love you” was her reply. Very united and visibly moved, Barack Obama and his wife Michelle returned to the White House (where they had been missing since 2017) for the presentation, scheduled yesterday, of their official portraits. “The portrait of Michelle captured everything I love about her: her intelligence, her grace and the fact that she is beautiful,” said Barack Obama. His comment also aroused the laughter of those present and the disapproving look of his wife. “She is beautiful, she really is,” she insisted. The former first lady, on the other hand, underlined the importance of those portraits: “Traditions like this matter, not only for those of us who have held those positions, but for all those who are part of democracy and protect it”. The portrait of Barack Obama, signed by Robert McCurdy, will be exhibited in the Grand Foyer, just off the Cross Hall which connects the East Room and the State Dining Room, where those of George W. Bush and Bill Clinton are located. The portrait of Michelle, by Sharon Sprung, will instead hang on the lower level of the White House, where the paintings of the other two first ladies are located.

The exchange of compliments with Biden

“America is lucky to have you as president,” Barack Obama later said to his successor, Joe Biden, during the ceremony. “You have guided us in difficult times, you have built and you have gone beyond the work done together, on health, climate and social justice”. The successor returns him with words of praise. “Nothing could have prepared me better for the presidency than to be by your side,” replied Joe Biden, giving the “welcome home” to the Obamas and underlining how Barack is “the most whole person I know” and his presidency is one of the most significant. of US history. And then turning to Michelle: “I know, but he knows it too, he would never have done it without you.”