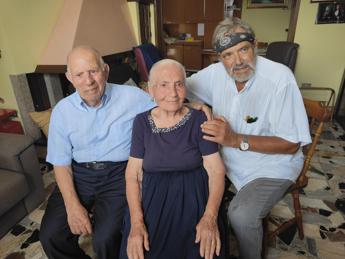 The great photographer, “the centenarians inspire me a sense of calm, perhaps because they show that they do not want to get more out of life than what they have already had. They resemble each other, a community of extraterrestrials, they have a mixed air of past and future . They are very fascinating human beings “

“The centenarians inspire me a sense of calm, perhaps because they show that they do not want to get more out of life than they have already had. Strangely, I find that they resemble each other, they give me the impression of belonging to a community of extraterrestrials, they have a mixed air of past and future. They are certainly very fascinating human beings. ” This is how Oliviero Toscani arrived in Ogliastra, in the countries of the Sardinian blue zone, for a photo shoot that, in the home and from house to house, will ‘portray’ the centenarians and the over nineties of the municipalities of Arzana, Baunei, Perdasdefogu, Villagrande, Talana and Urzulei. “One hundred, one hundred years! A mirage that also causes a certain fear, even though it is everyone’s dream to reach this age,” added the great photographer.


Oliviero Toscani accepted the invitation of the director Pietro Mereu, president of the cultural association Mater Dea, flanked by the vice president Ludovica Piras, to make author’s shots in one of the five blue zones with the world longevity record. “There are many photographers who have tried their hand at portraying Sardinian centenarians, but I always thought that a common project and a great master were needed to do it – said Pietro Mereu – So I thought it appropriate to contact Toscani. He immediately married the idea by telling me that, in one of her first works, she had portrayed Jeanne Calment in Arles, the oldest woman in the world who lived up to 122 years, who as a child cleaned Vincent van Gogh’s brushes “. The exhibition will arrive in the capital next year.