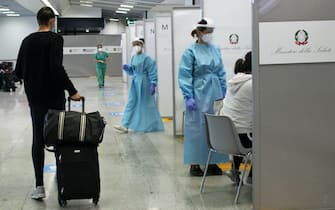 The government Italian holds firm line on you come from abroad. Until the January 31 will need a swab to enter Italy from abroad and the forty for the unvaccinated. “There is not much to think about”, says the premier Mario Draghi, rejecting the perplexities of Brussels

WATCH THE VIDEO: Omicron, WHO: likely to become dominant in Europe

In the squeeze, the Italian executive sees no inconsistency, convinced that other Member States, in the face of Omicron’s advance, Rome will follow in announcing similar travel measures in the next few hours

In the evening of December 15 did it there Greece, which announced new restrictions for the entry of “all travelers” into the country by imposing from December 19 a negative PCR buffer made within 48 hours prior to arrival. Initially this was announced for travelers from the UK and Denmark only, then it was extended to all

Also there France has announced that it will impose “drastic “restrictions to travel to and from United Kingdom in an attempt to slow the spread of the Omicron variant. From Saturday will prohibit non-essential travel to and from the UK

Covid, squeeze on EU entries: test obligation for all and quarantine for unvaccinated

“We will reduce the validity of the test to come to France 48 hours to 24 hours“, the government spokesman said, Gabriel Attal. “We will limit the reasons for coming to France from the UK, it will be limited to French citizens and residents and their families. Tourism or business travel for people who do not have French or European nationality or are not residents will be limited ”

Also, people returning from the UK “will have to register on an app and they will have to put themselves in self-isolation for seven days at a location of their choice controlled by the security forces, but this period may be shortened 48 hours if a negative test is carried out in France ”

Countries are starting to tighten on travel even outside the EU. Primarily Israel, which on December 16 has extended until midnight on December 29th the entry ban in the country for foreigners. He also confirmed Great Britain and Denmark as ‘red countries’

The Ministry of Health added to the red list France, Spain, Ireland, Norway, Finland, Sweden and the United Arab Emirates. It is possible that soon too use are included in the ‘red’ list. Under the current rules, for Israelis returning from these countries – even vaccinated ones – there is an obligation to molecular buffer before departure and on arrival and the 7-day quarantine

“The probability of a further diffusion of the Omicron variant it is very high and vaccination alone does not allow us to prevent its impact. A quick introduction from non-pharmaceutical measures it is needed to reduce transmission, “he said Andrea Ammon, the director of the ECDC, the European Center for Disease Prevention and Control, referring to the need for introduce containment measures to stop the variant

Between 14 and 15 December they were confirmed 502 new Omicron variant cases in the European Union and the European Economic Area (EEA), which includes 30 countries. Total cases are now 2.629. This is what emerges from the latest update of the Ecdc