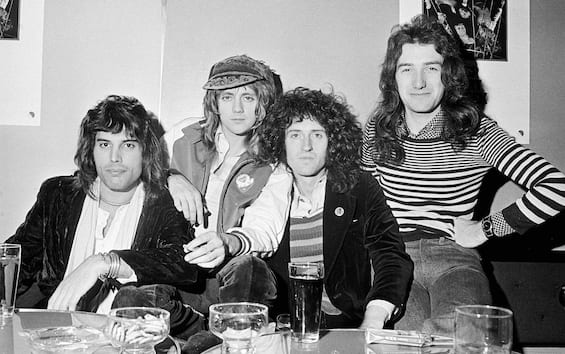 In this historical period one often ends up feeling a false nostalgia. Even those who have never had to deal with artifacts from another era such as cassette tapes or video recorders are in many cases perversely fascinated. However, those who would like the great return of telephone directories now have one more reason to plead their cause: on those pages full of numbers, not only were they looking for the number of a pizzeria but there was also space to write masterpieces such as Bohemian Rhapsody. Freddie Mercury wrote the first part of his visionary rock opera in his home in Kensington in London and, probably, the inspiration came so strong that it surprised him at a time when he had nowhere else to write down a very first sketch of what he would become, against all prediction, “the” masterpiece of Queen. Bohemian Rhapsody came out several months after that first point in the telephone book on October 31, 1975, and no one, apart from the authors, seemed to believe it too much that day. In hindsight, it is the numbers, as well as the artistic scope of the operation, that make skeptics change their mind: that much-mistreated composition became the first pre-1990 music video to reach a billion views on YouTube and the twentieth century song. most listened to in streaming. Chapeau, some would say.

In the film on the history of Queen which takes its name from this song still out of the canons today you can see the skirmishes of the band with their record company which, to be honest, was very reluctant to launch Bohemian Rhapsody as a single. Too long, too rich in even high references and without a univocal meaning: even today such a song would not seem to have an easy life on the radio. The same manager of the group John Reid was not very convinced of the choice made by his clients, so much so that he asked his friend Elton John for an opinion. The latter, while appreciating the work of his colleagues, certainly did not reassure him: “You’re crazy! The radios will never pass it !! ”, was the comment of the pop star who will later be among the first to pay homage to the song. Even the SIRs can make mistakes, as long as they are ready to make amends later.

To overcome the impasse and dispel the doubts of almost everyone, Freddie Mercury then decided to take the bull by the horns. He called his DJ friend Kenny Everett and asked him to play that particular musical creature on the radio where he worked. A single weekend was enough to make even the managers of EMI understand the potential (including commercial) of Bohemian Rhapsody, which ran in “heavy rotation” on Capitol Radio for 48 hours at the express request of the public.

It must be said that the initial skepticism was not entirely unjustified, however. Thinking that a piece so complex in structure and references could work was an act of faith of a certain level. To further complicate matters there was the fact that the text did not have a clear meaning and it was difficult to understand, especially if you did not grasp all the suggestions between the lines. Today there are many different interpretations of the meaning of this rock cornerstone but no one, not even the band members themselves, was ever able to give a univocal explanation. Freddie Mercury once dismissed the matter with a lapidary: “I think people should just listen to it, think about it for a moment and then decide for themselves what the song tells them.” Now that the author of the lyrics and leader of the band there is no longer the question of what he actually means Bohemian Rhapsody however, it continues to be made to guitarist Brian May, who, however, is groping in the dark about it like the rest of the listeners: “Freddie was a very complex person. Irreverent and fun on the surface but with a soul that reached strange depths. He never talked much about his childhood but there is a lot about himself and his origins in that song. I don’t think we’ll ever know what the meaning of Bohemian Rhapsodybut even if I knew it I wouldn’t say it ”.

What is certain is that, while lacking an overall cohesion, the text of Bohemian Rhapsody contains a lot of winks and references to even very high culture. Just think of the title (which was born as a tribute toHungarian Rhapsody by Franz Liszt) and to the explicit reference to Rossini’s work contained in the evocation of Figaro. Not just music, however, given the quotations from the Commedia dell’Arte, Galileo and the Koran one after the other, almost as if we were in a postmodern pastiche. Every single verse of Bohemian Rhapsody it has been analyzed in detail and even the apparently more understandable lines, such as the famous “Mamaaa, just killed a man” have become over time the subject of speculation. In the documentary Days of Our Lives, keyboardist Chris Smith says for example that that phrase was already born when he, May and Mercury were playing in Smile. The story of a shooting had to recall a song with a western atmosphere that Smith nicknamed at the time The Cowboy Song. Lyricist Tim Rice, a personal friend of Mercury, says instead that with that “Mamaaa, just killed a man” the singer evoked the death of an “old Freddie”, destined to be replaced by a new and better version of himself.

We talked about the text of Bohemian Rhapsody but don’t think that the gestation of the instrumental part was less interesting. The piece “contains multitudes” and has such a complexity that it required six weeks of studio work, one of which was dedicated only to the opera section. Those nearly six minutes were eventually recorded in as many as six different studios and, according to legend, all of them ran out of recording tapes available after Queen passed. Except Freddie Mercury, everyone else involved in the project had no idea what the end result of such a gargantuan work would be but were fascinated enough by the frontman’s ambition to get involved. Even producer Roy Thomas Baker stated that he had no idea what it would sound like on record. A lot of faith in Mercury was well placed and today we know that the iconic solo signed by Brian May is also partly thanks to him. The guitarist himself recounted how that moment of sound poetry was born, without taking away the merits of his companion: “Freddie came to the studio with a tape on which he had recorded the demo. He said to us, ‘Listen to this, dear ones. I think he will surprise you. ‘ We recorded it at different times, taking as a guide a Freddie Mercury vocal line above which we built the various parts. When Freddie asked me for a solo, I told him I wanted to sing a verse on the guitar. And that’s what I did: I sang, playing on the guitar. No effects: just the tremolo. I used a five pence coin as a pick ”.

The best song of the century

Queen did not immediately have the courage to present live Bohemian Rhapsody. They will do it for the first time in an abridged version only on 24 December 1975, when the band held a historic concert at London’s Hammersmith Odeon which was broadcast live by the BBC. Since Bohemian Rhapsody it became almost a popular anthem and even Elton John and Axl Rose re-enacted a historic version of it on April 20, 1992 at Wembley, during a tribute concert in honor of Freddie Mercury. However, theirs is not the most famous cover: according to a 2009 British poll, the most popular reinterpretation remains the one by the Muppets. It is reasonable to think that this is a bizarre revenge of karma against the initially dubious author of Rocket Man. Against his expectations today Bohemian Rhapsody it became the second most popular piece on British radio. In the UK this composition was even elected song of the century in 2000 while in the United States they decided to preserve it in the Library of Congress. Not bad for a song written in the telephone directory.