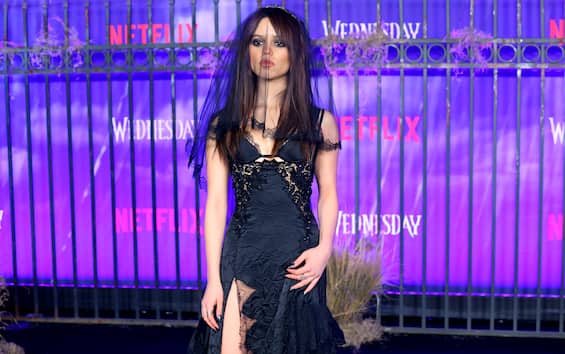 Jenna Ortega has revealed that she is the choreographer of the already iconic dance scene of the television series Wednesday.
In a special organized by Netflix, the actress said she created that ballet herself. This is the scene from the fourth episode of the record show, the series directed by Tim Burton that even beat the fourth season Stranger Things regarding success and views on the streaming platform (also visible on Sky Q and via the app on the Now Smart Stick).

In the aforementioned scene, Wednesday takes to the dance floor with Tyler, kicking off a moment that’s already viral.
“I actually felt really insecure about it,” Ortega explains in the Netflix special. “I choreographed it myself and I think it’s very obvious since I’m not a dancer or a choreographer.”

At the bottom of this article you can watch several videos and tweets in which we show you the inspirations for Wednesday’s choreography.

The inspirations of the dance

In a tweet, Jenna Ortega revealed the inspirations of her dance moves.
“Thanks to Siouxsie Sioux, Rich Man’s Frug by Bob Fosse, Lisa Loring, Lene Lovich, Denis Lavant,” wrote the protagonist of the TV series.
She added that “archival videos of the Goths in 80s clubs” also helped her pack a smack-dab ballet.
As for the fact that she’s all her own (sources of inspiration aside, of course), the co-star who accompanied her in that cult scene (Hunter Doohan as Tyler) confirms everything: “In the script It just said, “Wednesday dances and then Tyler goes after her. I kept asking what was going to happen and then Jenna shows up and does that thing.”
So Tyler’s character’s reaction on the dance floor proves to be really genuine, now discovering how that choreography came about. Only the intervention of the director Tim Burton then unlocked the actor: “I remember I said: ‘Tim, all I can do is stand here, my mouth open’ says Doohan. And he: ‘No, no, no. A lot of guys are going to relate to this scene,’” says Hunter Doohan.

More inspirations for that dance

The choreography of Dancing Wednesday also contains several homages to the Halloween-themed videos of those 80s in which the video clip of Thriller by Michael Jackson was a cornerstone of the horror genre as much as Dracula by Bram Stoker, so to speak.

Jenna Ortega at one point raises her hands, a move reminiscent of the zombies in Michael Jackson’s music video, also moving her claws from side to side, just like in the legendary video clip. Then we see her tilting her neck, as if she were a living dead; she finally swings her arms, in what looks just like a zombie ballet.

And on Twitter, a fan who saw us for a long time also wanted to underline the homage that the lead actress of this series would have made to the original television series, The Addams Family from the 60s. “You made a move that was an homage to John Astin’s Gomez. Don’t think we haven’t seen you. Well done,” he reads in a tweet.
Again to pay homage to the original black and white show, Ortega focused on the ballet scene that the original Wednesday (played in the 1960s by Lisa Loring) teaches Lurch.
In the episode titled Lurch’s Grand Romancelittle Wednesday shows the butler the steps of the Drew, a dance very similar to the one performed by Ortega in the Netflix TV series.

Wednesdaythe brand new Netflix TV series directed by Tim Burton and dedicated to the eldest daughter of the Addams house, has broken every record (every record for an English-language series, since the absolute record for now is still held Squid Game).

The same streaming platform has announced that the series by Miles Millar and Alfred Gough, directed in part by Tim Burton, has broken all records, surpassing the views achieved a few months ago by the fourth season of Stranger Things.

With 341.23 million hours viewed in its first week, this new eight-episode series takes the beat Stranger Things 4whose seven episodes totaled 335 million hours of play in the first full week it was available on the platform.
This is a historic record for an English-language series (the all-time record is held by Squid Gamewith 571.8 million hours viewed in its peak-rated week).
According to Netflix, Wednesday debuted in the Top 10 in all 93 countries where the service is available, placing #1 in 83 territories, just like Stranger Things 4. The streaming platform added that the teen horror series has been viewed by more than 50 million “household users”.

Although nothing is official, these are numbers that usually make a second season 100% certain… Which many are hoping for, totally in love with Jenna Ortega’s superb performance as Wednesday Addams. And in recent days the magazine TVLine has announced that the writers Al Gough and Miles Miller have spoken about the possible development of the second season of Wednesday, so something is almost certainly boiling in the pot.

Below you will find tweets and videos showing the various inspirations for Wednesday’s choreography.