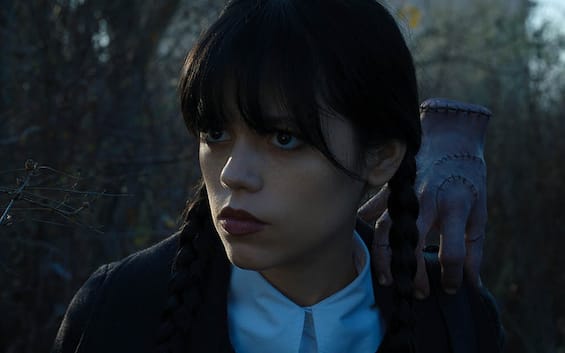 Netflix confirms that Wednesday, the record-breaking TV series, will return for a second season only on Netflix. More details on the second season will be shared soon. In an exclusive interview with Tudum.com creators, showrunners and executive producers Alfred Gough and Miles Millar said:

“It was incredible to create a show that connected people from all over the world. We are excited to continue Wednesday’s tortuous journey into Season 2. We can’t wait to dive headfirst into another season and explore the bizarre and spooky world of Nevermore. We just need to make sure Wednesday didn’t empty the pool early.”

Wednesday, produced by MGM Television, continues to have a sensational cultural impact in various fields: from entertainment to the web, from music to fashion, via cosmetics.

The numbers of the TV series Wednesday

Since the series debuted in November 2022:

● Wednesday is now one of the most successful series ever on Netflix. It ranks second in the Most Popular TV Products (English-language) chart with 1.237 billion hours viewed in the first 28 days.

● More than 182 million households have watched the series since its debut.

● Wednesday surpassed one billion viewing hours just three weeks after debuting, joining Stranger Things 4 and Squid Game as the third title to reach that milestone in its first 28 days.

● To date, Wednesday has been six consecutive weeks with more than 100 million hours viewed in the chart of the most popular TV products (English-language): another record!

● On TikTok, #WednesdayAddams has amassed over 22 billion views.

● Wednesday’s soundtrack hit #1 on the iTunes Soundtrack Chart, where it remained in the Top 10 for three weeks. Wednesday Addams now has over 1 million followers on Spotify.

● On Spotify, “Goo Goo Muck” by The Cramps has seen an increase in streaming of over 9500% compared to the month prior to the series’ release.

● Wednesday’s iconic dance scene went viral on social media around the world. Fan-generated content using Lady Gaga’s “Bloody Mary” led to an over 1800% increase in streaming of the song on Spotify compared to the month prior to the series’ release. Even Lady Gaga joined in the fun.

● With over 80 million views, fans can’t get enough of the cast’s reaction to the iconic dance scene video.

● Wednesday’s viral trick has been searched and viewed over 100 million times by fans on TikTok.

● Wednesday’s products are in high demand with select items sold out at retailers such as Hot Topic, MAC and Cakeworthy

WEDNESDAY, cast and production of season 1

● Synopsis: The 8-episode series is an investigative and supernatural mystery that traces Wednesday Addams’ years as a student at Nevermore Academy, describing her attempts to control her paranormal powers, to foil a monstrous series of murders that terrify the local community and solving the mystery involving her parents 25 years ago…all while exploring new and complicated relationships at Nevermore.