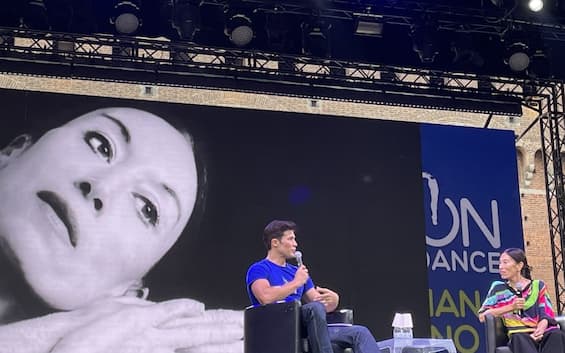 She arrives on stage greeted by the applause of the audience present at the Castello Sforzesco, accompanied by her beautiful dog Kalu. Royal, as always. Elegant, with an intense and strong look. She seems almost intimidated, but it only takes a few moments to recognize the heart and soul of Luciana Savignano, one of the most important dancers and performers of the 20th and 21st centuries. Yes, because the étoile, Béjart’s muse and interpreter of historical tales of dance, has no intention of giving up. And this is one of the topics that she faces, with her seraphic tenacity, in her dialogue with Roberto Bolle, étoile and creator of OnDance, a dance party that is taking place in Milan. Savignano is one of the protagonists, as indeed is her story, of a beautiful chat in which she tells about herself, of the dance that she marks her life, of the choreographers and dancers with whom she has worked.

“I would recommend everyone to do dance”

Visibly excited when he sees her arrive, Roberto Bolle immediately asks Savignano how much she is linked to the city of Milan and to the Castello Sforzesco, where he was also named Principal Dancer at the end of a show. Romeo and Juliet. “Milan is a city that welcomes. I am a romantic, even if you would never think, looking at myself on stage ”, says l’étoile, of which some photos also begin to scroll on the screen at the back of the stage. A dialogue, the one between the two stars of dance, which starts with the story of the artistic history of Luciana Savignano who, during her studies at the Academy, participated in a period of cultural exchange with Moscow, “a possibility that I do not have I had the opportunity to join but I would have liked to do so much ”, adds Roberto Bolle. A very important opportunity, especially because – says Savignano – “I met very good dancers. Then I worked with Mrs. Vassilieva, who tried to contain me a bit, since I was very slouching. “

“Dance made me therapy, I would recommend everyone to do dance” – adds Savignano. “Although I was very shy, the stage made me realize how privileged you are to be there and you shouldn’t be afraid of anyone.” Not even the opinion of colleagues, which is always “the most ferocious”, say Bolle and Savignano at And here Roberto Bolle adds: “For me, rehearsing in the room in front of colleagues was very difficult … For you Luciana?” “You know Roberto, Béjart observed everyone who watched the evidence, and the opinion of his colleagues was terrible,” admits Savignano candidly.

“Working with Béjart has always been simple, as if you had done it in another life”

“But working with Béjart has always been simple, everything was normal, as if I had done it in another life. I learned to be on stage. And with The moon Béjart really welcomed my essence, because I place myself and hide myself. When I was with him a few years ago, Maurice Béjart told me: ‘Luciana, you are not the dancer who ends up with fouettes, you can do many things’. That’s why I always like to look ahead ”, he says smiling the étoile. Working with Maurice Béjart was essential for Luciana Savignano, hers Bolero it is unforgettable and unforgotten. Bolero which Bolle will also stage next year at the Teatro degli Arcimboldi, with the Béjart Ballet Lausanne Company. “Maybe we’ll talk about it a bit together”, adds Savignano.

The artistic affinity with Jorge Donn, the creations of Mario Pistoni

A dialogue that continues with the story of the artistic affinity with Jorge Donn, an Argentine dancer who died very young, a very painful loss for Luciana Savignano who admits “that she has never again found such a strong affinity with a partner on stage. He might not have touched me, but what he transmitted to me was incredible ”. Creative affinity that she also shared with the choreographer Mario Pistoni, with whom she danced The wonderful mandarin and that he created for Savignano Concert of the albatross. “A choreographer who is not remembered enough”, says Luciana Savignano followed by the applause of the audience.

“Diversity is an added value”

We often speak of emotions, of diversity “which is an added value, and in my life I have understood that in dance everyone is a case in itself” but also of the moments of spirituality that the étoile has always sought before every show. “Before each show I would lie down on the ground, alone, in absolute silence. It was a moment that sent me into ecstasy, ”admits the étoile. She adds: “I’ve always felt the need to improvise, to find different shades. This also meant making small changes to the choreography, and the masters weren’t always enthusiastic. In fact, Alvin Ailey once told me “Luciana look, I’m the choreographer!”.

A story that is moving towards the end and that also sees Savignano talking about her future career as a dancer: “I still have the flame and I know that I still have to improve, to move on. I don’t know where I will arrive, but I know that I want to do it ”, says l’étoile, who concludes with a question to Bolle:“ Roberto, the best compliment they have ever given you? Then of course you have to ask me the same question! ”.

“Knowing how to excite”, says Bolle. “To me, when someone says they don’t know anything about dance, but with my show they got excited … well, that’s the most beautiful moment”, says Savignano, amid the thunderous applause of the audience who, through the stories of the étoile , experienced new emotions.