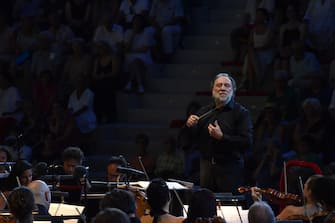 Somehow historic performance for the orchestra and choir of the Teatro alla Scala at the Chorégies in Orange. For the first time, in fact, musicians, singers and the conductor Riccardo Chailly performed in a shirt instead of the usual tailcoat to respond to the scorching temperatures caused by Apocalypse in the ‘Italian Night’ scheduled at the oldest festival in France

Orchestra and choir of the Teatro alla Scala performed in the splendid setting of the Ancient Theater, a Roman monument with 8300 seats, soldout

Jacopo Tissi returns to the Scala with Giselle

The program saw an excursus of Giuseppe Verdi’s work, between more and less known pages from Aida’s’ Va ‘, thought’, to ‘Jerusalem’ by the Lombards to the first crusade, from the finale of Don Carlos’ ballet, to ‘Patria oppressed by Macbeth, before the finale with Aida

Two and a half hours of concert, with a team of 88 orchestra professors and 112 choristers, dedicated to the symphonies and choirs of the Italian master

The program is the same as the three concerts performed in Milan between 3 and 8 June last, which were recorded by Decca to become an album to be released in 2023.

Stairs, the phone rings in the audience and Chailly interrupts the concert

For La Scala, on the other hand, that of Verdi’s choirs is a long and important tradition: until now they have been recorded by Claudio Abbado with the choir director Romano Gandolfi in 1971 for Deutsche Grammophon and in 1997 by Riccardo Muti and Roberto Gabbiani for Emi

And the tradition promises to continue with a tour in the autumn of next year in prestigious venues such as Amsterdam, the Verona Arena and the Vienna Musikverein where the traditional New Year’s concert takes place every year.

The audience showed their appreciation with applause, a shout ‘W la Scala’ (to which Chailly replied with a thumbs up giving the viewer right) and two encores, ‘Viva Simon’ from Simon Boccanegra and then ‘See the dark night spoils’ from the Trovatore, a choir in which the audience began to clap in time with the anvil as happens on New Year’s Eve with the march of Radetzky

At the end standing ovation for orchestra, choir, Chailly and for the choir director Alberto Malazzi