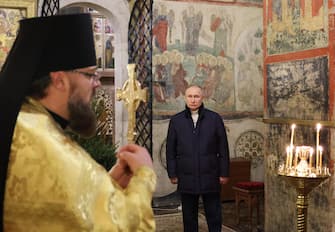 The Russian president, Vladimir Putinparticipated, in total solitude, in the religious function for the Orthodox Christmas which was held at midnight in the Annunciation Cathedral within the Kremlin

READ ALSO – Orthodox Christmas, here’s where and when to celebrate

Russian state TV aired some short clips showing Putin attending the mass celebrated by three orthodox priests. This is the first time in years that the Russian president has attended Christmas mass in Fly rather than in churches that were located in other regions of the Federation

READ ALSO – Russia, who is the blonde woman who always appears in different roles in the photos with Putin

The patriarch of Moscow, Kirill instead celebrated the liturgy in the Cathedral of Christ Savior, always in the capital, as reported by Ria Novosti. Last year, Tass stressed instead, Putin he had attended the Orthodox Christmas night service in the Church of the Image of the Saviorlocated in his presidential residence in Novo-Ogaryovo outside Moscow

The Belarusian opposition media Nexta he raised up Twitter Russian TV images Rossiya 1 in which Putin is seen, in a turtleneck sweater and jacket, alone in a room with the celebrants. Nexta spoke of the loneliness of the president “out of his own bunker”

The January 7th it is Christmas Day for the Eastern Catholic Churches and the Orthodox Churches that still follow the Julian calendar. However, some Orthodox have preferred to adapt to the new calendar introduced in 1582 from dad Gregory XIII: in Greece, for example, Christmas coincides with the Catholic one

In most of the Christian world it is customary to celebrate the birth of Jesus December 25th. A date that in ancient Rome coincided with the pagan festival of “Invincible sun” during which the victory over darkness was celebrated. Before the various schisms within the Christian world this date was universally accepted, except in the East where it was predominantly January 6

This distinction has endured just as long Gregory XIII he decided to introduce the new calendar (precisely Gregorian), capable of getting closer to reality astronomical. To achieve this, in that year, the days between 5 and 14 October were eliminated

Modification that the orthodox churches, however, decided not to adopt by continuing to use the old calendar introduced by Julius Caesar, named in his honor Julian. The only exception greek church Orthodox which, as in the West, celebrates Christmas on December 25th

In addition to the date, there are also others differences in the celebration of Orthodox Christmas. The faithful, in fact, observe a period of 40 days in which they embark on a path of prayer, during which they eat only lean foods, excluding meat and dairy products. A deprivation that on Christmas Eve becomes total with a suit fast until midnight, when night mass is held