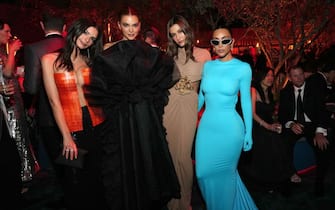 WATCH THE VIDEO: Oscar® 2022: the complete list of winners

The After Party looks are definitely more courageous than those shown at the awards ceremony. Just look at the sky-blue Balenciaga worn by Kim Kardashian

Oscar Awards 2022: the winners of the Academy Awards. PHOTO

The sister, Kendall Jenner, opted for a fluffy black with rouches (also by Balenciaga)

Oscar 2022, the most beautiful looks on the red carpet, from Zendaya to Kristen Stewart. PHOTO

Oscar 2022, where to see the winning films in streaming. Three are on Sky

Oscar 2022, No Time To Die: the lyrics of the best winning song

Still on the subject of awards, Jessica Chastain (Best Actress in a Leading Role for Tammy Faye’s eyes) opted for a green Gucci dress.

One of the few white dresses was worn by Zoë Kravitz, in Saint Laurent

Dakota Johnson’s Gucci feather dress was among the most admired

Kate Hudson refined (and in love) in Carolina Herrera

Veil and transparencies for Anya Taylor-Joy in Dior

Another black dress for Lily James, in Fendi

Jada Pinkett Smith and Will Smith, a couple of the “controversy” due to the actor’s slap in Chris Rock, have chosen a Dolce & Gabbana total look

The most romantic couple? The one formed by Joe Jonas and Sophie Turner (in Louis Vuitton), waiting for their second child

The most rock, the one formed by Kourtney Kardashian in Dolce & Gabbana vintage and Travis Barker