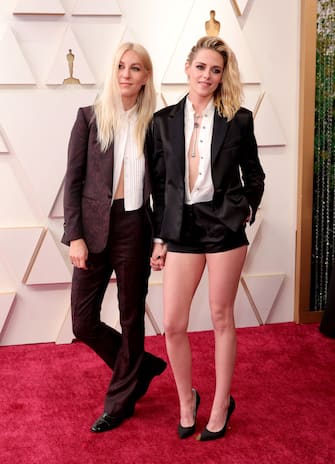 WATCH THE VIDEO: Oscar 2022, the most beautiful looks on the red carpet

Kristen Stewart chose a Chanel signature look. The actress was competing for the statuette for best actress (for her role in “Spencer”). The Oscar in that category was won by her colleague Jessica Chastain for “The eyes of Tammy Faye”)

For Kristen Stewart a black satin suit with a fitted blazer and a pair of shorts, with a semitransparent white shirt fastened only in two buttons and stiletto heels (alternating with flat moccasins), all by Chanel

Beyoncé at the 2022 Oscars sings Be Alive: the video of the performance

Kristen Stewart’s look winks at her partner’s outfit: Dylan Meyer wore an outfit similar to that of her partner

Oscar 2022, Will Smith’s slap to Chris Rock becomes a meme: here are the funniest

The look of Dylan Meyer differs from that of Kristen Stewart for the length of the pants: long for Dylan, very short for Kristen

Find out all about the 2022 Academy Awards

Stewart and Meyer turned out to be truly radiant. Also thanks to the coordinated outfit, with which they emphasized how close they are. Here they are on the red carpet as they share a kiss

Oscar 2022, No Time To Die: the lyrics of the best winning song from the film of the same name

Elegance and charm, here is the fil rouge that weaves the coordinated looks of Kristen Stewart and Dylan Meyer

Oscar 2022, where to see the winning films in streaming. Three are on Sky Cinema. PHOTO

Kristen Stewart and Dylan Meyer on the red carpet. Compared to most of the shots that immortalize the Oscar-nominated actress for her portrayal of her in the film “Spencer”, do you notice anything different here? Instead of stiletto heels, he wears very comfortable flat moccasins. Comfortable but still very chic, also by Chanel

Oscar, Troy Kotsur Best Supporting Actor. The speech with the dedication to the disabled