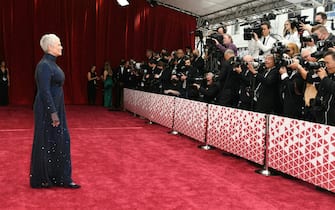 The 94th Night of the Oscars is about to begin at Dolby Theater in Los Angeles, which this year returns to host the ceremony. Before discovering the winners and winners of this edition, the stars walked the red carpet. In the photo, the actress Jamie Lee Curtis

WATCH THE VIDEO: Oscar, here are the favorite candidates, with Ukraine in mind

Amaree McKenstry-Hall, Matt Ogens, Nyle DiMarco and Geoff McLean arrived at the Dolby Theater in Hollywood for the ceremony

Night of the Oscars 2022, the live event

The American actress paraded on the red carpet Sofia Carson

Oscar 2022, the nominated films and where to see them

The US journalist also presents at the ceremony Maria Menounos

Among the first to arrive on the red carpet, Vanessa Hudgens in a sparkling black sequin dress

Paloma Garcia-Lee she showed up in green for the ceremony

The actress Nikki Novak on the red carpet

Even the DJ D-Nice attends the Oscars ceremony

The American actress Tracee Ellis Ross on the red carpet

The very young actress also attended the ceremony Saniyya Sidney15, who starred in the movie “A Winning Family – King Richard”