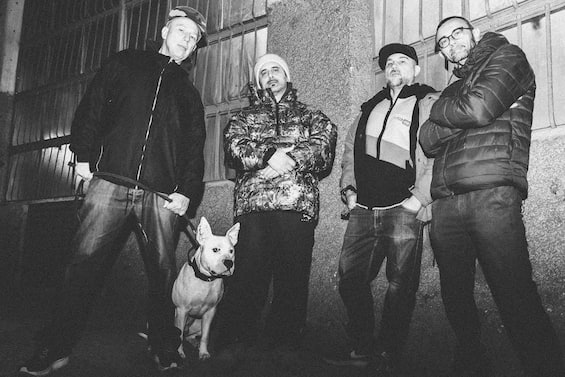 This disc collects some pieces that have been in the archive for some time such as “Potàla”: a beat produced by DJ Sandal in 2015 with a hypnotic sample on which we embroidered an introspective rap, full of flashes, quotes and similarities. Or “Il vero rap” on a beat by DJ Shocca from 2018, with a series of punch lines in which we take stock of the situation on what it means for us to “do rap well to do rap well”. Uncompromising until the end as the quote from the poet Salvatore Quasimodo’s poem “and it’s immediately evening” at the end of both verses reminds us. Other pieces were written in the “suspended” period of the pandemic, which forced the whole world to reflect on its priorities and lifestyle. In those months we took advantage of the forced break to hear from Esa and DJ Vigor by exchanging beats, samples for the scratches and jotting down some rhymes. As soon as it was possible to meet again in the studio in Milan, we fixed a weekly appointment and recorded several tracks such as “Fiore di Loto”: a very powerful base by Esa in the role of Captain Futuro or the title track “Splendente”. We have chosen this track as a manifesto, despite the far from brilliant period we have just passed. The OTRs were and still remain optimists, we leave the destructive and dystopian vision of the future to the movies. This music has been for us “Rap lifesaver in a sea of ​​nothing”, and Hip-Hop has saved the life of many friends, opening unthinkable paths at the beginning of this adventure. DJ Skizo also intervened to help us in drafting the definitive version of the album, bringing his sounds, his dark, tense or slightly melancholic atmospheres as in “Identity Crisis” a sort of psychoanalytic session in which we take stock of our past proudly claiming what we have done without renouncing our identity. Or in “This is war” a 2.0 version of Gente Guasta’s classic “Lotta Armata”, in which we demonstrate that the Hip-Hop weapons we use are still very sharp. And it’s good to always have a little “cazzimma” as we sing in another track also produced by Skizo AKA Godzilla. We cannot fail to mention and thank two exceptional featurings: Tormento who is back with us “Sotto questi Stelle” telling his experience at the dawn of the Original Transmission of the Rhythm (meaning of the acronym OTR NdA) in a piece in pure style storytelling. Then Toni L from Heidelberg, German MC of Italian origin known at the first international jams in the ’90s and already on the album “Dalla Sede”, now as a stainless funk joker after thirty years still around to animate a thousand parties. Finally, the piece of which we have just made this video clip “Quality rap” is on beats by the historic Roman producer DJ Ice One, recognizable with its roughness of kick and snare and the pressing of the rhythm that automatically starts the up / down of the head. The black and white images signed by Carlos Gasparotto have the four of us as protagonists in a minimal scenario. Two microphones, two turntables, beats and rhymes are our scenography that frames us. Old school simplicity through and through.