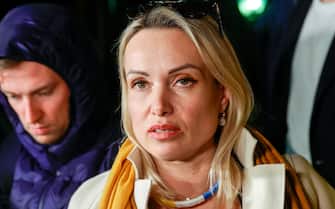 It was one of the first symbolic faces ofRussian opposition to the war that Putin launched against theUkraine. A little over two months ago, on live television, Marina Ovsyannikova appeared in front of the television news cameras of Channel One with a sign urging Russian viewers not to believe the Kremlin’s “propaganda”. Today he tells the Telegraph that “would do it all againDespite the problems caused by his act of rebellion

Ovsyannikova says she is aware that probably what saved her from prison was the enormous media coverage of her gesture. “The more you expose yourself and are straightforward about your social positions, the more the authorities will be frightened. If they had jailed me, there would have been some protests“, he explains to the British newspaper, adding that now his detractors in Russia” are doing their best because people forget me“and they are” putting out conspiracy theories to raise doubts about the genuineness of my civic protest ”

Kirill Kleimyonovdirector of the news division of Channel One, where for years Ovsyannikova worked as a producer and journalist, on live television called her a British spy who “betrayed his country”

Many feared that the protest gesture could cost Ovsyannikova dearly. After spending a night in the police station, she was instead released behind the payment of a fine (in the photo, Ovsyannikova together with her lawyer)

On the day of the protest, the journalist recalls that she “did not have time to think” about consequences. “I only felt scared after I did it,” she says

Ukraine, from cartoons to schools: how Mariupol is “Russifying”

The German newspaper Die Welt offered a contract to Ovsyannikova, who was also recently awarded in Norway with the Vaclav Havel THEnternational Prize for showing their dissent publicly

However, the wave of approval with which his gesture was received by the Western media was not as strong in Eastern Europe. In Ukraine, it always reports the Telegraphthere are those who describe Ovsyannikova as a “Russian propaganda statesman that has fueled the war for years ”

The Ukrainian activist Daria Kaleniuk he called it “humiliating for Ukrainians” to see her win the Vaclav Havel prize. And also the offer of Die Welt it made many turn up their noses. “There are dozens of journalists who are looking for a place in Europe” – says the reporter Farida Rustamovaalways cited by Telegraph – “but the place goes to Marina Ovsyannikova. With all due respect, it was not she who took the risk by working in Putin’s Russia”

THE sonsreceived by her husband who is now asking for exclusive custody, have accused Ovsyannikova of having “destroyed” their family lifeshe says herself

If he went back, Ovsyannikova would do it all again anyway. “We are not doing it for us. We do it for the future of Russia, lest it fall into medieval obscurity ”. The war, he concludes, has become a “point of no return“Besides which” private problems mean nothing when compared to those of the Ukrainian people ”