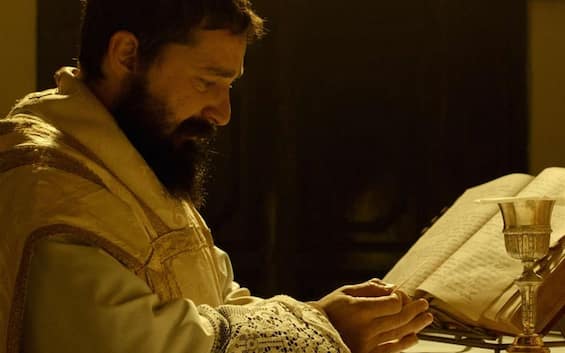 Start with these strong, powerful words carved into the Father Pio, Abel Ferrara’s latest film, presented at the Venice Days, an independent review within the Venice Film Festival. A work that marks the return to the Lido of the “Cinema di Poesia”. Following in the footsteps of Pier Paolo Pasolini, with the scandalous revolutionary force of the past, the American director who has lived and worked in Rome for some time rewrites the story of Franceso Forgione born in Pietrelcina, in the province of Benevento. The doubts, the anxieties, the temptations of that visionary friar whom the world will know with the name of Padre Pio merge with the miseries, the hopes, the pains of the population of San Giovanni Rotondo, a town in the Gargano mountains, a place of poverty, disease, political unrest, where God seems very far away. We are in the autumn of 1920, on the threshold of the first political elections in an Italy, which has recently emerged from the First World War. Between love, confession and empathy, Francis fights against those demonic forces that can take the most varied forms. You know, the devil is not who he is, but who you want him to be.

Father Pio (which we hope to see soon at the cinema) is a film that opens and closes on the tears of a man who is not a saint who performs miracles, but a human being who carries all the pain in the world upon himself. Thanks to Alessandro Abate’s grainy and crepuscular photography, the camera gives us the faces, the emotions, the pains of an archaic but absolutely current Italy. The happy choice to mix non-professional actors, authentic monks, with stars of the caliber of Shia LaBeouf (extraordinary protagonist), gives the work the strength of a choral and powerful fresco. Shot after shot, one perceives a country that would like to change its destiny among those socialist and red flags that stand out against the background of the Savoy tricolor. However, the dream died on October 14, 1920. The socialists won the elections in San Giovanni Rotondo, but the right-wing coalition did not accept the result and the party turned into a bloodbath. A forgotten massacre that marks the beginning of a terrifying period. It is no coincidence that the devil whispers these words to Padre Pio: “Do you think the last five years have been bad? You will see the next twenty”.

The deafening silence of God who throws into utter despair The bad Lieutenant played by Harvey Keitel is transfigured into the divine hand that comforts Padre Pio in tears. The eternal struggle between good and evil, between Christ and Satan, is consummated on the notes of Midnight with the stars and you. And the film also offers us a notable cameo of Asia Argento in the male role of a demon who confesses his terrifying aberrations to the friar of Pietrelcina, in an attempt to upset the monk. But unlike The Addiction it is no longer the time to Pecco Ergo Sum, but of the “I confess, therefore I am”.