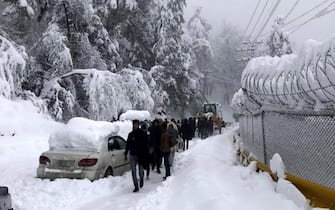 I am at least 44 dead in Pakistan after the bad weather that has hit various parts of the country in recent days, with blizzards and frost

WATCH THE VIDEO: Chile, 5.6 magnitude earthquake in the north of the country

According to the latest official bulletin, at least 41 are injured

The other news from Pakistan

Soldiers and rescuers at work in Pakistan after the blizzard

Among the victims, at least 22 – including 10 children – are freezing death in their cars, blocked in the street by the snow that congested the town of Murree, in Punjab

In Punjab itself, 7 other people are death from the collapse of a roof, under the weight of the snow

Another 12 people lost their lives and 29 were injured in the northwestern district of Khyber Pakhtunkhwa, on the border with Afghanistan, after the snowfalls but also heavy rains

But the balance of storms also includes animal deaths, the destruction or damage of many homes, severe damage to roads and other infrastructure, blocking of traffic

One of the areas most affected by the snow storm is Murree, a mountain town in Pakistan about 30 kilometers from the capital Islamabad

In the area, over a thousand cars they got trapped by the snow

The snowfall started on Tuesday night and continued at regular intervals, initially attracting thousands of tourists. With congested traffic, some people died inside their stuck cars

The blizzard in Pakistan