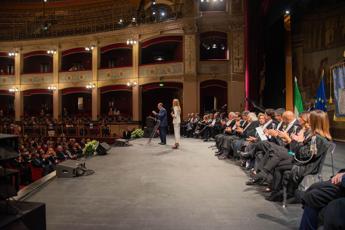 The ‘Day of the pride of belonging to the advocacy and welcoming of young people’ took place in the afternoon at the Politeama ‘Garibaldi’ Theater in Palermo. The event, now in its sixth edition, was established in 2016 by the Council of the Palermo Bar Association, with the aim of welcoming young future lawyers and transmitting to them the fundamental principles of the legal profession, as well as the pride of ‘being lawyers ‘. During the ceremony, conducted by the journalist Elvira Terranova, the lawyers with 50 and 60 years of activity and those who during their working career have distinguished themselves in institutional legal functions and in social and public functions were awarded. “A heartfelt thanks to the municipal administration, which again this year has granted us the privilege of being here – said Antonello Armetta, president of the Council of the Palermo Bar Association -. Thank you because this day does not have a self-celebratory purpose but has the intention of cultivating the pride of belonging to this category “.


“I want to remember those colleagues and those jurists who are not here with us today: their absence weighs heavily – he added -. It has been a busy year for our Council, we have carried out various initiatives with great determination. Justice does not it is a service, but a function: it cannot admit speed as the only tool for measuring its own efficiency. We need to reaffirm the civil centrality of the figure of lawyers. We should develop a clear, fair and sustainable vision of our future “. “I am here today as a lawyer and not as president of the Region – said the governor Renato Schifani -. In 1996, after almost thirty years of career, I embarked on my political path, but I have always followed developments with great attention. I fought a lot, when I was president of the Senate, for the forensic reform to be approved: it was a necessary intervention for the whole category. I want to say to young lawyers to always have great consistency, even when it comes to giving up a position that would lead to a certain defeat “.

On stage, representing the mayor of Palermo, his deputy, Carolina Varchi. “We must all contribute to maintaining the prestige of our profession, which plays an important role for society – he said -. As a parliamentarian I fought for various measures relating to the forensic world and I will continue to do so. The Municipality of Palermo pays the utmost attention to the category: various future initiatives will be dedicated to the forensic profession. To young boys who swear today I want to say that the toga must be worn freely, freedom that must also be present in saying no “. Representing the CNF was the vice president, Francesco Greco, who in 2016 instituted the Day of pride in belonging to the advocacy and welcoming young people. “I firmly believe in the function of the lawyer, our profession exists where democracy and freedom are present – he said -. We cannot fail to focus on the decrease in the number of lawyers in our country. a negative trend on members that must make us reflect. The role of the lawyer in society must be reconsidered: the relationship between citizen and lawyer must change. The lawyer must understand what the concrete needs of civil society are “.

For the institutional greetings on stage also the lawyer Accursio Gallo, member of the coordination office of the Forensic Congress Body, and the lawyer Valter Militi, president of the Forensic Fund. The awards ceremony for lawyers with 60 years of activity began with the intervention on the stage of Girolamo Bongiorno, historical representative of the category and emeritus professor of Civil Procedural Law at the University of Palermo. Subsequently, the Donato Messina scholarship was awarded to Giusto Leone for the legal practice in criminal law. Then, the Andrea Ajello scholarship was presented, in memory of the boy from Palermo who tragically died on August 27 in a car accident. Ajello was about to complete his career as a lawyer, as he had always dreamed of. The scholarship was awarded to Roberta Cirrito. A special recognition, during the event, was then assigned to Federico Ferina.

Subsequently, the ‘golden togas’ were awarded (Alfredo Emanuele Blandi, Giuliana Guzzo, Marika Schiavo): the candidates who, during the exam sessions, obtained the highest score in the overall evaluation. UNCAT (National Union of Chambers of Tax Lawyers), represented by Angelo Cuva, conferred a free master’s degree in tax matters to Giuliana Guzzo. Subsequently, the Maurizio Bellavista prize was awarded, named in memory of one of the deans of the Palermo legal profession: the award went to Matteo Florena. To deliver the award the lawyer brothers Mario, Guglielmo and Fabrizio Bellavista. A musical interlude by Mario Bellavista accompanied the Politeama ceremony, which ended as usual with the oath and the solemn commitment of the young lawyers.