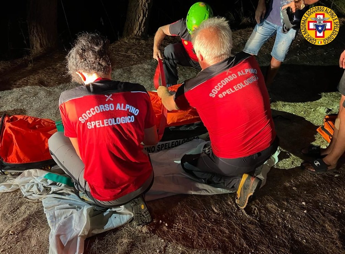 Sicilian Speleological and Alpine Rescue technicians in action in the late evening to rescue an injured runner in the woods between Monreale and Pioppo. RM, 55, from Monreale, she was training alone in the area of ​​via Esterna Valle Cuba when she slipped on the dirt road, falling into ruin and causing the suspected dislocation of the right hip. It was just after 7 pm and the woman, not without difficulty due to the scarce presence of the field, managed to sound the alarm at the NUE112 central which, through 118, being a particularly inaccessible area, requested the intervention of the Alpine Rescue but only at 9.30 pm. In a few minutes two teams from Palermo reached the scene of the accident, immobilized the woman, placed on a stretcher and transported to the paved road where a 118 ambulance was waiting for her. The runner was taken to the nearby hospital. Ingrassia, in Palermo.


In the same area on 8 February the Sicilian Alpine and Speleological Rescue had intervened to rescue a motorcyclist who was the victim of an accident in the Casaboli wood, in the territory of Monreale. The woman, EC, 46, from Palermo, was doing enduro with a group of friends in the Valle Cuba area when, on a particularly bumpy stretch of dirt road, she lost control of the bike and fell, hitting her left side. on a boulder and rolling for a few meters, reporting a suspected abdominal thoracic trauma.