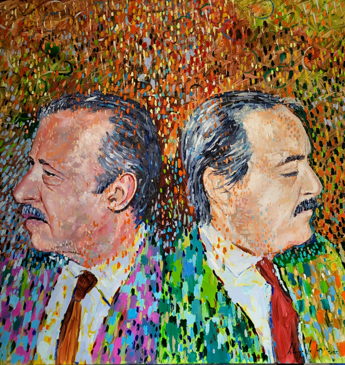 The monumental Church of San Domenico in Palermo, pantheon of illustrious men of Sicily, will be the setting for the inauguration of the special edition for the Metropolitan City of Palermo of the “Il Risveglio” Opera Festival of Stone Theaters, promoted by the Sicilian Opera Choir , which is preparing to stage the first of ten event evenings on December 1st, at 9 pm, with the innovative contemporary opera “Falcone and Borsellino, or the wall of martyrs’, celebrating the thirtieth anniversary of the death of the two great magistrates. In 2022, 30 years have passed since the killing of the two judges who dedicated their lives to the fight against the mafia; it is no coincidence that it was decided to open the event in a place that is a symbol of legality and memory, which preserves the remains of judge Giovanni Falcone

The tragic events that shocked not only Palermo and Sicily but the whole of Italy have remained indelible in everyone’s heart and mind. “Falcone and Borsellino, or the wall of martyrs”, is a work of strong civil commitment due to the courage of two authors who belong to the same land as the two magistrates: Antonio Fortunato, the composer, and Gaspare Miraglia, the librettist. The work takes place on the day of the anniversary of the assassination attempt on the magistrate Giovanni Falcone.Just when discouragement seems to have taken over everything and everyone, unexpectedly, an assembly of citizens (exponents of civil society), tired of suffering in silence the outrage of “cosa nostra”, which by now also affects individual existence, arrives in copious numbers.

“The intent of this popular gathering, as well as paying dutiful homage to the two heroes, Giovanni Falcone and Paolo Borsellino, and to the thousands of victims slaughtered by the mafia, is, even if not above all, to reawaken the collective the world of organized crime which, more and more openly, intends to affirm its ferocious rules of violence and oppression”, reads a note. The pleas of the community are poignant and heartfelt, so that the two judges, ideally, come back to the supplicant citizens to tell their tragedy. In the end, at least through poetry and music, the indignation of the honest manages to vanquish the terrible monster that is no longer tolerable in a civil and democratic society, and it is hoped that the resulting catharsis will be welcomed by civil society.

The single act will see the Calabrian Philharmonic Orchestra and the Sicilian Lyrical Choir lined up, under the authoritative baton of Giuliano Betta. The cast includes, for the musical part, the participation of Clara Polito (the mother of all the victims of the mafia), Francesco Verna (the father) and Riccardo Bosco (Mafia, incarnation of evil), while for the acting part Alessandro Idonea and Bruno Torrisi (who will give voice, respectively, to Giovanni Falcone and Paolo Borsellino). The Sicilian Lyric Choir will interpret the sentiments of the Palermo civil society and will be instructed, as usual, by its permanent teacher, Francesco Costa, while the participation of the “Note Colorate” Children’s Choir is also expected, directed by Giovanni Mundo, who will impersonate the souls of children killed by the mafia.

Furthermore, for the gala event, the unpublished work of the Palermo painter Filippo Lo Iacono, a well-known artist with an international career, will be presented. The festival, promoted by the Ministry of Culture and the Metropolitan City of Palermo, with the partnership of Rai Sicilia, can count on sponsorships such as the European Parliament, the President of the Senate of the Republic, the President of the Chamber of Deputies, the Superior Council of the Judiciary the Ministry of Culture, the Sicilian Region, the Pontificium Consilium de Cultura, Enit, the Italian Confederation of Archaeologists, the Verona Foundation for the Arena. The busy calendar includes events from 1 to 10 December, which will take place both in more sensitive neighborhoods and areas of the city and in areas that have connotations of particular historical, artistic and monumental value, for a work of cultural decentralization: Sperone, Borgo Nuovo , Brancaccio, Zisa will be transformed, for one night, into the stages of great theaters.

An extraordinary inauguration for the 2022 Festival, which combines beauty, art, and, through the opening event evening, also civil commitment and dutiful remembrance, establishing itself as the musical and artistic season of reference in the south, giving beauty and harmony and “awakening” with the power of great music.