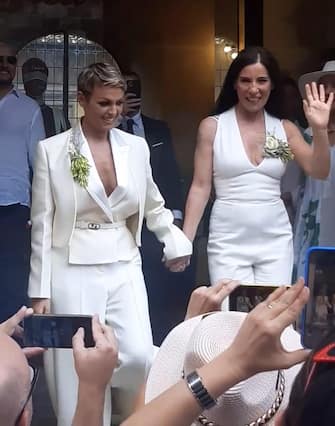 The two women got married on Saturday 2 July. Francesca Pascale and Paola Turci both arrived in Montalcino, in the province of Siena, dressed in white. The first in a suit, the second in a long, low-cut dress.

The couple arrived in the square where Palazzo dei Priori is located aboard a white Jaguar, a crowd of onlookers awaiting them. Both in trousers and white, Francesca Pascale wore a blazer, Paola Turci a jumpsuit with thin straps and embroidered bodice.

Paola Turci, career and private life: from the accident to the marriage with Francesca Pascale

The brides aboard a Jaguar arrive smiling, visibly excited, and both dressed strictly in white. In the photo, Francesca Pascale

Francesca Pascale, from Berlusconi’s ex-girlfriend at the wedding with Paola Turci. PHOTO

The rite for the civil union was celebrated in Palazzo dei Priori, the historic seat of the Municipality of the town of Siena famous for its precious Brunello. To celebrate the mayor Silvio Franceschelli. In the photo, Francesca Pascale

Watch the VIDEO: “Francesca Pascale and Paola Turci get married”

After the civil ceremony, the mayor of Montalcino told Adnkronos: “Every year I celebrate many weddings because our village and our territory are famous all over the world”. In the photo, the two brides are shot from behind as they arrive

“I can say that today’s was particularly exciting. I perceived a true feeling: they are two people who love each other and have strongly expressed their feelings”, the mayor’s comment.

The bond of love between the singer and Francesca Pascale, lived with great discretion without ever any official public release, was made official by the publication of a photo on a yacht on a weekly magazine a few months after the break with Silvio Berlusconi, but as is known , there has never been any confirmation or denial from the parties directly concerned.

After the civil ceremony, the brides and the few envoys met at the Castello Velone, also in Val d’Orcia for a great party, very private according to their wishes.