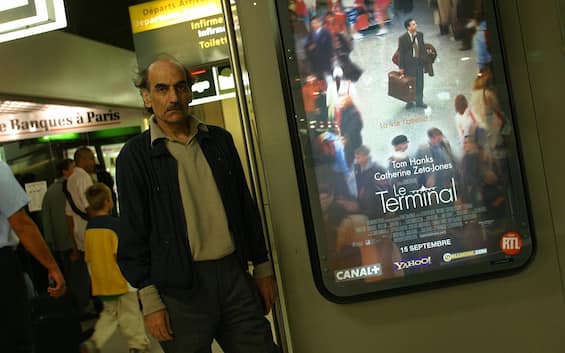 He died where he had lived for almost 20 years of his life, in the Paris Roissy-Charles de Gaulle airport. The homeless Mehran Karimi Nasseri, 78, Iranian refugee who called himself Sir Alfred by all, he died this morning in terminal 2F. The incredible story of him became famous all over the world thanks to Steven Spielberg, who was inspired by him for the famous film “The Terminal” starring Tom Hanks and Catherine Zeta Jones.

It was 2004 when the story of Nasseri became known to the whole planet thanks to the movie “The Terminal”. In a particularly difficult life, those were the only years of glory for Sir Alfred, who at the Paris airport began to receive journalists from the press, radio and TV sitting on a red sofa. After a few years of separation – spent in a hotel room – the homeless man had returned to the airport for a few weeks, having exhausted the resources raised at the time of the film. From the interviews in 2004 emerged his desire to “escape” from the airport and the American dream, that of a happy ending to his story in California: “I am flattered that my story can inspire films – he said – here I spend my days to write notes on my life, to read American and English newspapers and some novels. But here we can’t talk about life! I hope The Terminal will help me leave for the United States “.

A life at the airport

He was born in 1945 in Masjed Soleiman, in the Iranian province of Kuzistan, but had settled at Roissy airport in November 1988 after a long journey that had led him to London, Berlin and Amsterdam in search of his mother. Each time, the authorities of those countries had expelled the undocumented exile. In 1999 he had finally obtained refugee status in France and a residence permit but – perhaps in a confusion from years of stay at the airport and the stress – he refused to sign for the documents: “I’m not in my name – he had explained according to the chronicles of those days – I am no longer what I was. Now my name is Sir Alfred Merhan and I am not Iranian. My father was Swedish and my mother Danish “. Roissy definitively became his refuge, Sir Alfred was helped and greeted with sympathy by all the airport staff, who knew they would always find him “between the sandwich shop and McDonald’s”. Preferential treatment was reserved for him at the airport’s dry cleaners and ironing rooms.