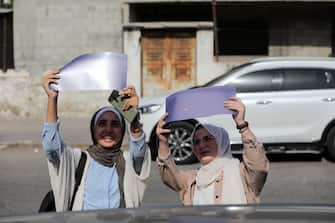 Today’s partial solar eclipse could be admired, with the necessary precautions and the right tools, from Europe to the Urals, in much of Asia and in north-east Africa. The maximum darkening of the solar disk was reached around 12.22 Italian time

From Italy the phenomenon was clearly visible, with a slightly higher percentage of obscuration for the regions of the North-East, such as Veneto and Friuli-Venezia Giulia, compared to those of the South-West, especially Sicily and Sardinia, where the eclipse ended a few minutes later than the other areas (in the photo Milan)

The phenomenon, for Italy that lasted about a couple of hours in all, was also visible from a large part of the Mediterranean area, with the sole exclusion of Portugal and a part of Spain (in photo Huddersfield, in Great Britain)

The greatest extent was instead in the area of ​​Siberia, in Russia, where the solar diameter covered reached 80%: for comparison, in Italy the obscuration concerned from 22% to 29% of the sun, a depending on the geographic location

The solar eclipse always occurs when our satellite is in the new moon phase, that is, the moment when it is not visible. In addition to this condition, the moon must also be on the same line of sight between the Earth and the Sun (in photo Stockholm)

Depending on the type of alignment, there will be a total, annular eclipse (when the moon is in the farthest point of its orbit and its shadow, therefore, cannot completely cover the solar disk) or partial, like that one. of today

For a total eclipse observable from Italian soil, however, we will have to wait much longer, until 2081 (in photo Ankara)

It is essential to admire the show in safety, using only binoculars and telescopes equipped with suitable filters certified for observing the sun, and not simply attenuated: direct observation of the sun, in fact, can cause damage to eyes.

(in the photo Cairo)