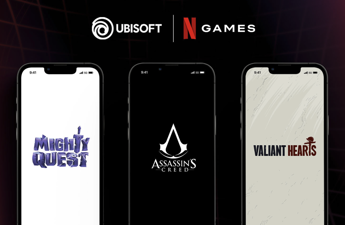 Assassin’s Creed, Valiant Hearts and The Mighty Quest will arrive for Netflix users on iOS and Android

Netflix and Ubisoft have announced the development of three mobile games based on some of the French company’s video game franchises. They will be available to Netflix users starting in 2023. First unveiled at Ubisoft’s annual digital event, Ubisoft Forward, the three games will expand the universes of Valiant Hearts, Mighty Quest and Assassin’s Creed, and will be available on mobile devices exclusively for Netflix members worldwide with no ads or in-app purchases. A new Valiant Hearts game, a sequel to Ubisoft’s Valiant Hearts: The Great War, is being developed by the original team and will offer a new story. It will be available in January 2023. The Mighty Quest franchise will arrive on Netflix in 2023 with a new game. This time around, the title will be inspired by the roguelike genre and will offer the series’ first hack and slash experience in a format that focuses on replayability.


Assassin’s Creed fans will be able to re-immerse themselves in the Assassin’s Creed universe on Netflix in more ways than one. In fact, in addition to the already announced live action series, a new game for mobile devices will also be developed. “We are very excited to partner with Ubisoft, who have a unique experience in creating memorable worlds for fans,” said Mike Verdu, vice president of gaming at Netflix. “This partnership will give our members exclusive access to some of the most exciting gaming franchises, allowing us to continue expanding the catalog of great mobile titles available to our members around the world.” Jean-Michel Detoc, Ubisoft’s Chief Mobile Officer, added: “As we continue to create great experiences across all platforms, we are delighted to partner with a partner as creative as it is innovative as Netflix. I believe this partnership will be a great opportunity for Netflix members to further explore our worlds and universes in the mobile format. “