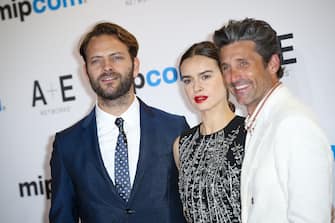 Comes on Sky Diavoli 2, the second season of the TV series with Patrick Dempsey and Alessandro Borghi based on the bestseller by Guido Maria Brera

An exceptional story of finance, power and disillusionment with a cast of stars led by Patrick Dempsey who plays Dominic Morgan, the American CEO of an international investment bank and one of the most powerful men in global finance

Patrick Dempsey: 5 things you don’t know about the American actor

Patrick Dempsey and his wife Jillian Fink, the love story

The actor remarried in 1999 with make-up artist Jillian Fink with whom he also had three children: Tallulah Fyfe and twins Darby Galen and Sullivan Patrick

Devils 2, the cast on the red carpet

Devils 2, the trailer of the tv series with Patrick Dempsey

Patrick Dempsey’s departure from “Grey’s Anatomy” after 10 years resulted in the death of his character, Dr. Derek Shepherd (neurosurgeon and husband of Meredith Grey’s), victim of a car accident in the eleventh season

Devils, where to see the TV series

Before meeting Meredith Gray, Derek Shepherd married Addison Montgomery (played by Kate Walsh) in the series Grey’s Anatomy, who at the end of the third season, in 2007, became the protagonist of the spin-off “Private Practice”

After being married to Nina, character played by Kasia Smutniak, in the first season of Devils, Dominc Morgan is ready to start again

In the TV series Devils, Patrick Dempsey plays Dominic one of the most powerful men in world finance

Despite having abandoned the role of Derek Shepherd in the series Grey’s Anatomy, for everyone he remains the most famous and competent neurosurgeon on television, able to solve any case that comes before him.

The truth about the Harry Quebert case is a story that keeps you in suspense until the end. Also in this TV series Patrick Dempsey is at the center of a love story, the one between Harry and Nola.

Patrick Dempsey has been in the cast since the first episode of Grey’s Anatomy, a series that he leaves only in the eleventh season. Off the set, the actor is also a racing driver.