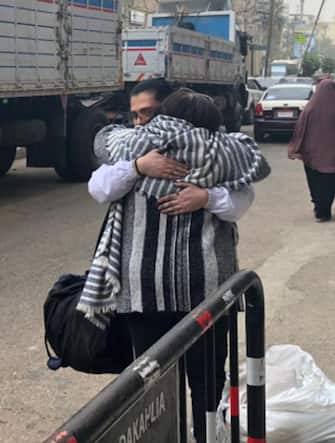 Patrick Zaki has been released from prison. As soon as he left the Mansura police station, where he was being held, he hugged his mother. The student and activist of the University of Bologna had been in prison since February 7, 2020, when he was arrested as soon as he arrived in Egypt for a vacation. “I mean many thanks to the Italians, in Bologna, at the University, to my colleagues, to anyone who supported me “, said Zaki as soon as he arrived at his family’s home in Mansura, specifying that – as soon as he can – he will go” directly to Bologna. I want to be in Italy as soon as possible”

The release was ordered during the hearing that was held in Mansura yesterday, Tuesday 7 December. Zaki, 30, born in Egypt, is not yet however been acquitted from the allegations of having spread fake news “inside and outside” his country of origin. The next hearing will be held on February 1, 2022. In the photo, Zaki with his sister Marise just after his release

Patrick Zaki: what happened in the third hearing of the trial

“Everything good“were the first words of Zaki just released from prison White – color symbol of the defendants in the Egyptian trials – according to sources present on the spot, after leaving the police station, Zaki would have raised his hand with the index and middle fingers as a sign of victory

Patrick Zaki, all the stages in the history of the Egyptian student

Speaking with journalists outside the police station, Zaki also dedicated his thoughts to Bologna, his own Heart team in Italy: “Long live Bologna football“, he said (in the photo, Zaki just released from prison in a photo taken from his sister’s Facebook profile)

One of the first things Patrick Zaki did as soon as he got home after being released from jail was wearing one University of Bologna t-shirt, which the university had sent him

Zaki was indicted at the end of last summer. His stay in prison, from February 2020, had been renewed from time to time on the basis of custody orders

The indictment was then ordered for having disseminated information that the judiciary believes false through three articles journalistic. In one of these he denounced the condition of the Coptic Christians in Egypt, discriminated against by some Muslim fringes and persecuted by Isis

Zaki was in a Mansura prison, where he had recently been transferred from Tora prison, near Cairo

The Foreign Minister Luigi Di Maio commented the embrace between the student and his mother, a gesture that has already become a symbol of his release: “A hug that is worth more than many words. Welcome back Patrick! “, he wrote in a post on Facebook

For the President of the European Parliament David Sassoli, the hug is “the image of a nice day, from hope”

“We were waiting to see that hug from 22 months and that hug comes from Italy, from all the people, all the groups and local authorities, the university, the parliamentarians who made sure that that hug came “. Thus Riccardo Noury, spokesperson for Amnesty International Italy, commenting on the photo of the hug

“Now that we have seen that embrace, we are waiting for this freedom to be not temporary but permanent. And with this hope we will arrive at February 1, next hearing”, said Noury.

“Today is one day of celebration, even if we must not let our guard down until the complete acquittal of the charges “, said the rector of the University of Bologna, Giovanni Molari.” We hope that Patrick can get behind these two painful years and may soon return to yours you study here in Bologna, in his university. His place is here, in our community, together with his classmates and teachers who can’t wait to embrace him again “, he added.