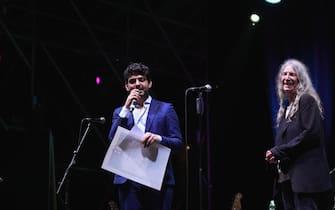 The commissioner Tommaso Sacchi went up on the stage set up in Castello Sforzesco to deliver the parchment for “art and culture” to Patti Smith.

As stated by the councilor Tommaso Sacchi, Patti Smith was awarded “for her attachment to the city that inspired her work, for her passion for the places, artists and people of Milan, for her love for Italian art and culture and for her contribution to music in the world ”

The parchment, signed by the mayor of Milan Giuseppe Sala, was given to Patti Smith before the start of the concert

In 2020 Patti Smith had held a mini-concert on Instagram during the pandemic to alleviate people’s pain, with a special dedicated in Milan

For his concert at Castello Sforzesco in Milan, Patti Smith she was accompanied by her son Jackson Smith on the guitar, by the drummer Seb Rochford and from Tony Shanahan at the bottom

During the performance, Patti Smith he sang some of his most notable hits like Because the night, People have the power And Grateful

Before the pandemic, Patti Smith had performed in Milan for the last time in December 2019 in the former Ansaldo spaces